The War in the Air; Vol. 1 The Part played in the Great War by the Royal Air Force 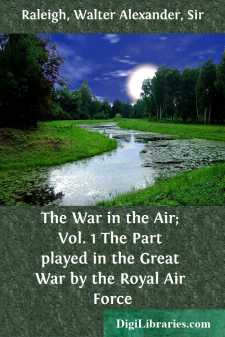 When Great Britain declared war upon Germany in August 1914, she staked her very existence as a free nation upon an incalculable adventure. Two new means and modes of warfare, both of recent invention, enormously increased the difficulties of forecast and seemed to make precedents useless. Former wars had been waged on the land and on the sea; the development of submarines and aircraft opened up secret ways of travel for armed vessels under the sea and promised almost unlimited possibilities of observation and offence from the heights of the air.

Of these two new weapons the submarine was brought earlier to a state of war efficiency, and because it seemed to threaten the security of our island and the power of our navy, it excited the greater apprehension. But the navigation of the air, whether by airship or aeroplane, is now recognized for the more formidable novelty. The progress of the war has proved that within the narrow seas the submarine can be countered, and that the extension of its capabilities on the high seas is beset with difficulties. For aircraft the possibilities are immense. It is not extravagant to say that the 17th of December 1903, when the Wright brothers made the first free flight through the air in a power-driven machine, marks the beginning of a new era in the history of the world.

The differences to be looked for in this new era were both over-estimated and under-estimated, according to the temper of those who considered them. Imaginative people, and sentimental people, looked for the speedy fulfilment of Tennyson's vision:

For I dipt into the future, far as human eye could see,Saw the Vision of the world, and all the wonder that would be;Saw the heavens fill with commerce, argosies of magic sails,Pilots of the purple twilight, dropping down with costly bales;Heard the heavens fill with shouting, and there rain'd a ghastly dewFrom the nations' airy navies grappling in the central blue;Far along the world-wide whisper of the south-wind rushing warm,With the standards of the peoples plunging thro' the thunder-storm;Till the war-drum throbb'd no longer, and the battle-flags were furl'dIn the Parliament of man, the Federation of the World.

The Germans, who as a people fall easy victims to agreeable sentiment, indulged extravagant hopes from war in the air, and expected great achievements from their Zeppelins. On the other hand, the English, who are less excitable, were comparatively slow as a nation to appreciate the importance of the new invention. Conservative and humorous minds are always conscious chiefly of the immutable and stable elements in human life, and do not readily pay respect to novelty. Those who were responsible for the naval and military defences of the country preserved great coolness, and refused to let judgement outrun experience. They knew well that the addition to man's resources of yet another mode of travel or transport does not alter the enduring principles of strategy. They regarded the experiment benevolently, and, after a time, were willing to encourage it, but 'up to the end of the year 1911', says an official report, 'the policy of the Government with regard to all branches of aerial navigation was based on a desire to keep in touch with the movement rather than to hasten its development. It was felt that we stood to gain nothing by forcing a means of warfare which tended to reduce the value of our insular position and the protection of our sea-power.' When the Wright brothers offered to sell their invention to the British Admiralty, the offer was refused.

It is natural enough that believers in the new art, who devoted years of disinterested thought and labour to getting it recognized, and who truly foresaw its enormous importance, should be impatient of so cautious an attitude. But the attitude itself was also natural and excusable. The British navy is a great trust, responsible not so much for the progress of the nation as for its very existence. Untried courses, new investments, brilliant chances, do not commend themselves to trustees. By adherence to a tried policy and to accustomed weapons the navy had ridden out many a storm that threatened national wreckage; what it had done so often it believed that it could do again; and it was slow to grasp at new weapons before their value was proved. So the progress of aerial science followed what, in this country, is the normal course. We have had many great poets and many great inventors....