The War and Unity Being Lectures Delivered At The Local Lectures Summer Meeting Of The University Of Cambridge, 1918 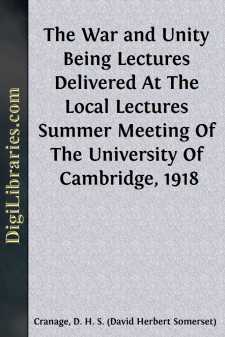 The governing idea of this early morning course, which at the present as at former Summer Meetings is devoted to a subject connected with religious belief, is this year the power that Christianity has, or is fitted to have, to unite Christian denominations with one another, and also to unite races and nations, and different portions of that commonwealth of nations which we call the British Empire, and different classes within our own nation. A moment's reflection will shew that the question of unity between denominations of Christians derives special significance from being placed in connexion with all those other cases in regard to which the promotion of unity is to be considered. If it belongs to the genius of Christianity to be a uniting power, it is above all in the sphere of professed and organised Christianity, where Christians are grouped together as Christians, that its influence in producing union should be shewn. If it fails in this here, what hope, it may well be asked, can there be that it should be effective, when its principles and motives cannot be applied with the same directness and force? In the very assumption, then, which underlies this whole course of lectures, that Christianity can unite men, we have a special reason for considering our relations to one another as members of Christian bodies, with regard to this matter of unity.

But we are also all of us aware that the divisions among Christians are often severely commented on by those who refuse to make any definite profession of the Christian Religion, and are given by them sometimes as a ground of their own position of aloofness. It is true that strictures passed on the Christian Religion and its professors for failures in this, as well as in other respects, frequently shew little discernment, and are more or less unjust. So far as they are made to reflect on Christianity itself, allowance is not made for the nature of the human material upon which and with which the Christian Faith and Divine Grace have to work. And when Christians of the present day are treated as if they were to blame for them, sufficient account is not taken of the long and complex history, and the working of motives, partly good as well as bad, through which Christendom has been brought to its present divided condition. Still we cannot afford to disregard the hindrance to the progress of the Christian Faith and Christian Life among men created by the existing divisions among Christians. Harm is caused by them in another way of which we may be, perhaps, less conscious. They bring loss to ourselves individually within the denominations to which we severally belong. We should gain incalculably from the strengthening of our faith through a wider fellowship with those who share it, the greater volume of evidence for the reality of spiritual things which would thus be brought before us; and from the enrichment of our spiritual knowledge and life through closer acquaintance with a variety of types of Christian character and experience; and not least from that moral training which is to be obtained through common action, in proportion to the effort that has to be made in order to understand the point of view of others, and the suppression of mere egoism that is involved.

These are strong reasons for aiming at Christian unity. But further there comes to all of us at this time a powerful incentive to reflection on the subject, and to such endeavours to further it as we can make, in the signs of a movement towards it, the greater prominence which the subject has assumed in the thought of Christians, the evidence of more fervent aspirations after it, the clearer recognition of the injury caused by divisions. I remember that some 40 or more years ago, one of the most eminent and justly esteemed preachers of the day defended the existence of many denominations among Christians on the ground that through their competition a larger amount of work for the advance of the kingdom of God is accomplished. We are not so much in love with competition and its effects in any sphere now. And it should always have been perceived that, whatever its rightful place in the economic sphere might be, it had none in the promotion of purely moral and spiritual ends....