The War and the Churches 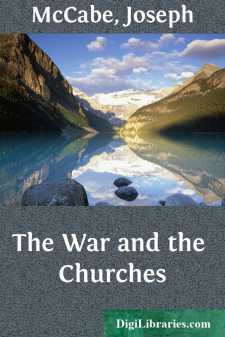 CHAPTER I THE RESPONSIBILITY OF THE CHURCHES

The first question which the unprejudiced inquirer will seek to answer is: How far were the Churches able to prevent, yet remiss in using their influence to prevent, the present war? There is, unhappily, in these matters no such thing as an entirely unprejudiced inquirer. Our preconceived ideas act like magnets on the material of evidence which is submitted to us, instinctively selecting what bears in their favour and declining to receive what they cannot utilise. Nowhere is this more conspicuous than in the field of religious inquiry, nor is it confined to either believers or unbelievers. There has been too much mutual abuse, and too little attention to the fact that the mind no less than the mouth has its palate, its impulsive selections and rejections. One can meet the difficulty only by a patient and full examination of the pleas of both parties to a controversy.

And the first plea which it is material to examine is that, since it is claimed that all the nations engaged in the war are Christian nations, one may accuse them collectively of moral failure. From the earliest days of the Christian religion it was the boast of those who accepted it that it abolished all distinctions of caste and race. In the little community which gathered round the cross there was neither bond nor free, neither Greek nor Roman. This cosmopolitanism was, in fact, a natural feature of religious movements at the time, and was due not so much to their intrinsic development as to the political circumstances of the world in which they spread. All round the eastern and northern shores of the Mediterranean a great variety of races mingled in every port and every commercial town, and it was the policy of the powerful Empire which extended its sway over them all to overrule their national antagonisms. When, in the earlier period, Jew and Greek and Egyptian had maintained their separate nationalities, hostility to other races had been a very natural social quality, an inevitable part of the spirit of self-preservation in a race. When the great Empires had conquered the smaller nationalities or the decaying older Empires, this mutual hostility was moderated, and, as the vast movements of population which marked the end of the old and the beginning of the new era filled the Mediterranean cities with extraordinarily mixed crowds, mutual friendship became the more fitting and more useful social virtue. A good deal of the old narrow patriotism had been due to the fact that each nation had its own god. In the new Roman world this theological exclusivism broke down, and the priests of a particular god, scattered like their followers among the cities of the eastern world, began to seek a cosmopolitan rather than a nationalist following. In the temple of each of the leading gods of the time—Jahveh, Serapis, Mithra, and so on—people of all races and classes were received on a footing of equality. The doctrine of the brotherhood of man spread all over that cosmopolitan world.

When the old world, to the south and east of the Mediterranean, was blotted out of history, and Europe in turn became a group of conflicting nationalities, racial hatred was revived and in its political and social aspects the doctrine of the brotherhood of man was virtually forgotten....