The War and Democracy 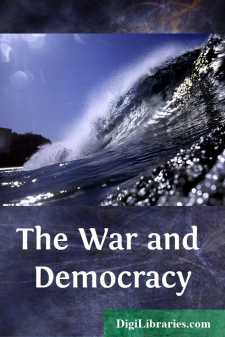 "It seems to me that the amount of lawlessness and crime, the amount of waste and futility, the amount of war and war possibility and war danger in the world are just the measure of the present inadequacy of the world's system of collective organisations to the purpose before them. It follows from this very directly that only one thing can end war on the earth, and that is a subtle mental development, an idea, the development of the idea of the world commonweal in the collective mind."—H.G. WELLS in 1908.

THIS is a testing time for Democracy. The people of Great Britain and the Dominions, to whom all the world looks as the trustees, together with France and America, of the great democratic tradition, are brought face to face, for the first time, with their full ultimate responsibility as British citizens. Upon the way in which that responsibility is realised and discharged depends the future of the democratic principle, not only in these islands, but throughout the world.

Democracy is not a mere form of government. It does not depend on ballot boxes or franchise laws or any constitutional machinery. These are but its trappings. Democracy is a spirit and an atmosphere, and its essence is trust in the moral instincts of the people. A tyrant is not a democrat, for he believes in government by force; neither is a demagogue a democrat, for he believes in government by flattery. A democratic country is a country where the government has confidence in the people and the people in the government and in itself, and where all are united in the faith that the cause of their country is not a mere matter of individual or national self-interest, but is in harmony with the great moral forces which rule the destinies of mankind. No form of government is so feeble as a democracy without faith. But a democracy armed with faith is not merely strong: it is invincible; for its cause will live on, in defeat and disaster, in the breast of every one of its citizens. Belgium is a living testimony to that great truth.

British Democracy has carried this principle of confidence to the furthest possible point. Alone among the States of Europe, Great Britain relies for her existence and for the maintenance of her world-wide responsibilities upon the free choice of her citizens. Her privileges are extended to all: her active obligations are forced upon none. Trusting in the principle of individual freedom, and upon the sound instinct and understanding of her people, she leaves it to each citizen to make his choice whether, and in what manner, he shall serve his country. Never have responsibilities so arduous and so urgent been laid upon the citizens of any community: and never have the citizens been so free to choose or to decline the burden. The world will judge Great Britain, and judge Democracy, according to the measure of our free response.

What is the nature of the responsibility cast upon us at this crisis?

It is threefold. It concerns the present, the past, and the future....