The Wanderings and Homes of Manuscripts Helps for Students of History, No. 17. 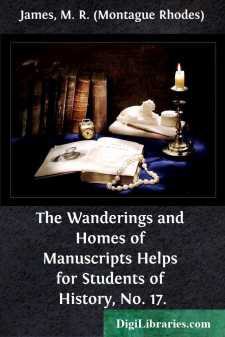 THE WANDERINGS ANDHOMES OF MANUSCRIPTS The Wanderings and Homes of Manuscripts is the title of this book. To have called it the survival and transmission of ancient literature would have been pretentious, but not wholly untruthful. Manuscripts, we all know, are the chief means by which the records and imaginings of twenty centuries have been preserved. It is my purpose to tell where manuscripts were made, and how and in what centres they have been collected, and, incidentally, to suggest some helps for tracing out their history. Naturally the few pages into which the story has to be packed will not give room for any one episode to be treated exhaustively. Enough if I succeed in rousing curiosity and setting some student to work in a field in which an immense amount still remains to be discovered.

In treating of so large a subject as this—for it is a large one—it is not a bad plan to begin with the particular and get gradually to the general.

Some Specimen Pedigrees of MSS.

I take my stand before the moderate-sized bookcase which contains the collection of MSS. belonging to the College of Eton, and with due care draw from the shelves a few of the books which have reposed there since the room was built in 1729.

The first shelf I lay hands upon contains some ten large folios. Four of them are a single great compilation, beginning with a survey of the history of the world and of the Roman Empire, and merging into the heraldry of the German noblesse. It was made, we find, in 1541, and is dedicated to Henry VIII. Large folding pictures on vellum and portraits of all the Roman Emperors adorn the first volume. It is a sumptuous book, supposed to be a present from the Emperor Ferdinand to the King. How did it come here? A printed label tells us that it was given to the college by Henry Temple, Viscount Palmerston, in 1750 (he had previously given it to Sir Richard Ellys on whose death Lady Ellys returned it: so much in parenthesis). Then, more by luck than anything else, I find mention of it in the diary of Thomas Hearne, the Oxford antiquary; his friend Thomas Jett, F.R.S., owned it and told him about it in 1722: he had been offered £100 a volume for it; it was his by purchase from one Mr. Stebbing. It was sold, perhaps to Palmerston, at Jett's auction in 1731. The gap between Henry VIII. and Stebbing remains for the present unfilled. So much for the first draw.

Next, a yet larger and more ponderous volume, Decreta Romanorum Pontificum—the Papal decretals and the Acts of the Councils. It is spotlessly clean and magnificently written in a hand of the early part of the twelfth century, a hand which very much resembles that in use at Christchurch, Canterbury. I am indeed, tempted to call it a Canterbury book; only it bears none of the marks which it ought to have if it was ever in the library of the Cathedral Priory. Was it perhaps written there and sold or given to a daughter-house, or to some abbey which had a less skilful school of writers? Not to Rochester, at any rate, though Rochester did get many books written at Christchurch....