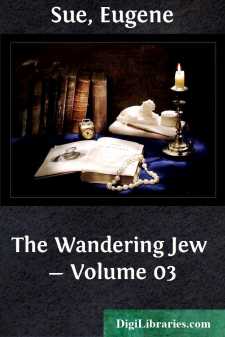 During the preceding scenes which occurred in the Pompadour rotunda, occupied by Miss de Cardoville, other events took place in the residence of the Princess Saint-Dizier. The elegance and sumptuousness of the former dwelling presented a strong contrast to the gloomy interior of the latter, the first floor of which was inhabited by the princess, for the plan of the ground floor rendered it only fit for giving parties; and, for a long time past, Madame de Saint-Dizier had renounced all worldly splendors. The gravity of her domestics, all aged and dressed in black; the profound silence which reigned in her abode, where everything was spoken, if it could be called speaking, in an undertone; and the almost monastic regularity and order of this immense mansion, communicated to everything around the princess a sad and chilling character. A man of the world, who joined great courage to rare independence of spirit, speaking of the princess (to whom Adrienne de Cardoville went, according to her expression, to fight a pitched battle), said of her as follows: "In order to avoid having Madame de Saint-Dizier for an enemy, I, who am neither bashful nor cowardly, have, for the first time in my life, been both a noodle and a coward." This man spoke sincerely. But Madame de Saint-Dizier had not all at once arrived at this high degree of importance.

Some words are necessary for the purpose of exhibiting distinctly some phases in the life of this dangerous and implacable woman who, by her affiliation with the Order of Jesuits, had acquired an occult and formidable power. For there is something even more menacing than a Jesuit: it is a Jesuits; and, when one has seen certain circles, it becomes evident that there exist, unhappily, many of those affiliated, who, more or less, uniformly dress (for the lay members of the Order call themselves "Jesuits of the short robe").

Madame de Saint-Dizier, once very beautiful, had been, during the last years of the Empire, and the early years of the Restoration, one of the most fashionable women of Paris, of a stirring, active, adventurous, and commanding spirit, of cold heart, but lively imagination. She was greatly given to amorous adventures, not from tenderness of heart, but from a passion for intrigue, which she loved as men love play—for the sake of the emotions it excites. Unhappily, such had always been the blindness or the carelessness of her husband, the Prince of Saint-Dizier (eldest brother of the Count of Rennepont and Duke of Cardoville, father of Adrienne), that during his life he had never said one word that could make it be thought that he suspected the actions of his wife. Attaching herself to Napoleon, to dig a mine under the feet of the Colossus, that design at least afforded emotions sufficient to gratify the humor of the most insatiable. During some time, all went well. The princess was beautiful and spirited, dexterous and false, perfidious and seductive. She was surrounded by fanatical adorers, upon whom she played off a kind of ferocious coquetry, to induce them to run their heads into grave conspiracies. They hoped to resuscitate the Fonder party, and carried on a very active secret correspondence with some influential personages abroad, well known for their hatred against the emperor and France. Hence arose her first epistolary relations with the Marquis d'Aigrigny, then colonel in the Russian service and aide-de-camp to General Moreau. But one day all these petty intrigues were discovered. Many knights of Madame de Saint-Dizier were sent to Vincennes; but the emperor, who might have punished her terribly, contented himself with exiling the princess to one of her estates near Dunkirk.

Upon the Restoration, the persecutions which Madame de Saint-Dizier had suffered for the Good Cause were entered to her credit, and she acquired even then very considerable influence, in spite of the lightness of her behavior. The Marquis d'Aigrigny, having entered the military service of France, remained there. He was handsome, and of fashionable manners and address. He had corresponded and conspired with the princess, without knowing her; and these circumstances necessarily led to a close connection between them.

Excessive self-love, a taste for exciting pleasures, aspirations of hatred, pride, and lordliness, a species of evil sympathy, the perfidious attraction of which brings together perverse natures without mingling them, had made of the princess and the Marquis accomplices rather than lovers....