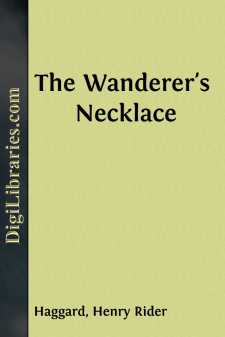 CHAPTER I THE BETROTHAL OF OLAF

Of my childhood in this Olaf life I can regain but little. There come to me, however, recollections of a house, surrounded by a moat, situated in a great plain near to seas or inland lakes, on which plain stood mounds that I connected with the dead. What the dead were I did not quite understand, but I gathered that they were people who, having once walked about and been awake, now laid themselves down in a bed of earth and slept. I remember looking at a big mound which was said to cover a chief known as "The Wanderer," whom Freydisa, the wise woman, my nurse, told me had lived hundreds or thousands of years before, and thinking that so much earth over him must make him very hot at nights.

I remember also that the hall called Aar was a long house roofed with sods, on which grew grass and sometimes little white flowers, and that inside of it cows were tied up. We lived in a place beyond, that was separated off from the cows by balks of rough timber. I used to watch them being milked through a crack between two of the balks where a knot had fallen out, leaving a convenient eyehole about the height of a walking-stick from the floor.

One day my elder and only brother, Ragnar, who had very red hair, came and pulled me away from this eyehole because he wanted to look through it himself at a cow that always kicked the girl who milked it. I howled, and Steinar, my foster-brother, who had light-coloured hair and blue eyes, and was much bigger and stronger than I, came to my help, because we always loved each other. He fought Ragnar and made his nose bleed, after which my mother, the Lady Thora, who was very beautiful, boxed his ears. Then we all cried, and my father, Thorvald, a tall man, rather loosely made, who had come in from hunting, for he carried the skin of some animal of which the blood had run down on to his leggings, scolded us and told my mother to keep us quiet as he was tired and wanted to eat.

That is the only scene which returns to me of my infancy.

The next of which a vision has come to me is one of a somewhat similar house to our own in Aar, upon an island called Lesso, where we were all visiting a chief of the name of Athalbrand. He was a fierce-looking man with a great forked beard, from which he was called Athalbrand Fork-beard. One of his nostrils was larger than the other, and he had a droop in his left eye, both of which peculiarities came to him from some wound or wounds that he had received in war. In those days everybody was at war with everybody else, and it was quite uncommon for anyone to live until his hair turned grey.

The reason of our visit to this chief Athalbrand was that my elder brother, Ragnar, might be betrothed to his only surviving child, Iduna, all of whose brothers had been killed in some battle. I can see Iduna now as she was when she first appeared before us. We were sitting at table, and she entered through a door at the top of the hall. She was clothed in a blue robe, her long fair hair, whereof she had an abundance, was arranged in two plaits which hung almost to her knees, and about her neck and arms were massive gold rings that tinkled as she walked....