The Voyage of The First Hessian Army from Portsmouth to New York, 1776 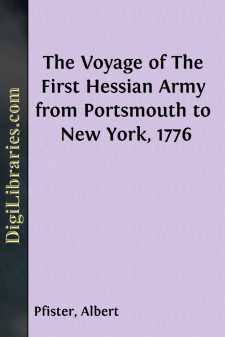 The troops belonging to the first Hessian Division had as yet not all been assembled in the harbor of Portsmouth, for, on account of the lack of transport ships, General von Mirbach with his regiment and that of Commander Rall, a Knyphausen Company, and a part of the Commissariat still remained at Bremerlehe, when the fleet was ready and the wind often long in coming, was just then very favorable to leave the channel. Then a rather peculiar circumstance occurred to prevent the start. Heister, the Hessian Commander-in-Chief, refused to start, feeling bound by the land grave’s express orders to keep all his divisions together. The king became exceedingly impatient, for the delay set an incalculable amount at stake—at last the Hessian minister at London, General von Schlieffen, took upon himself the responsibility of this urgent matter, and Heister, with a spirit of true faithfulness to service, went over with his Hessian troop ships to the remaining squadron at anchor at St. Hellens in the immediate vicinity.

The fleet as gathered here numbered 100 sailing vessels, among which were 2 men-of-war with 50 cannons, 4 frigates of 36 cannons, and 2 fire-ships for the protection of the transports and provision ships. These vessels carried in all about 12,500 land troops, of which the 7400 Hessians were distributed in 52 ships. William Hotham, their Commodore, was on the man-of-war Preston. When the ship captains had received from him the signaling directions and their sealed instructions (which may be opened only after a ship has sailed in order to learn its destination), he gave the signals to weigh anchor and to sail by means of a cannon shot and the displaying of a flag. This was on the evening of the 6th of May.

Very soon an adverse and violent storm arose, the sea became turbulent and there was much seasickness. No one could stand upright in the cabins, everything was tossed about pell-mell and sailors fell overboard and could not be saved; yet the fleet by the evening of the 9th was sailing with calmer weather through the dangerous region of the Scilly Islands, where, over a mass of rocks and reefs a warning lighthouse stood. After sunset the last land was seen to disappear under the horizon, the promontory, Landsend. On the next day the cables, which usually are on the capstan, were coiled on deck; still greater waves, and more violent motions of the ship indicated that the vessels had reached the great ocean. Who may be the master of the ocean was made evident during the very next few days to the astonished soldiers, when a Danish and later two Swedish East Indian ships were passing through the fleet; these then lowered their flags and a sail of the middle mast, as soon as they were within the distance of a shot. This was the mark of esteem which every foreign ship on meeting an English man-of-war or squadron in the Atlantic Ocean was to render to it, as indicating the recognition of Great Britain’s sovereignty there.

A perfect calm had set in; the great waves rose to an astonishing height, and, although at a time of wind and full sail, the vibrations of the ships are lessened by the quick forward motion, yet in calm the opposite is true, for the ships were heaving and pitching, so that there seemed to be danger of complete capsizing, or at any rate of the loss of the masts. In the darkness of night the foam sparkled on the ships and at times the lightning flashed and quivered on the waves. Several ships had already met with accidents, in getting badly damaged by running against each other, and in some the constant pumping out of water was made necessary. The ship Good Intent ran with its prow into the stern of the Claudina, on which there was a company of the regiment von Knyphausen under Lieutenant Baum, and to the great anguish and cry of the crew and troops made a great hole over the cabin. The ship Speedwell, on which there was Lieutenant-Colonel Block with the Grenadier-Company of the Prince Karl regiment drew so much water that it seemed doomed to sink. Accordingly signals of distress were hoisted, the Commodore signaled the fleet to halt and by means of several boats had the ship thoroughly investigated. It became evident that there was no immediate danger, and that, with constant use of the pumps, the Speedwell could continue the voyage.

On the 20th of May a strong wind suddenly arose (simply good fresh air as the sailors said), but the water became rough, the waves struck over the decks, and all fires were ordered to be put out; porpoises made their appearance in great numbers, the sight of which was cheering especially to the officers who shot at them; little was it supposed by them then that these porpoises were but the forerunners of an approaching storm....