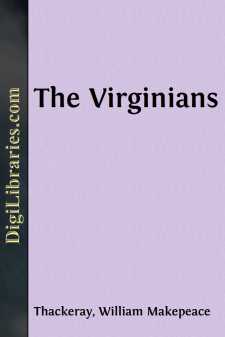 CHAPTER I. In which one of the Virginians visits home

On the library wall of one of the most famous writers of America, there hang two crossed swords, which his relatives wore in the great War of Independence. The one sword was gallantly drawn in the service of the king, the other was the weapon of a brave and honoured republican soldier. The possessor of the harmless trophy has earned for himself a name alike honoured in his ancestors' country and his own, where genius such as his has always a peaceful welcome.

The ensuing history reminds me of yonder swords in the historian's study at Boston. In the Revolutionary War, the subjects of this story, natives of America, and children of the Old Dominion, found themselves engaged on different sides in the quarrel, coming together peaceably at its conclusion, as brethren should, their love ever having materially diminished, however angrily the contest divided them. The colonel in scarlet, and the general in blue and buff, hang side by side in the wainscoted parlour of the Warringtons, in England, where a descendant of one of the brothers has shown their portraits to me, with many of the letters which they wrote, and the books and papers which belonged to them. In the Warrington family, and to distinguish them from other personages of that respectable race, these effigies have always gone by the name of "The Virginians"; by which name their memoirs are christened.

They both of them passed much time in Europe. They lived just on the verge of that Old World from which we are drifting away so swiftly. They were familiar with many varieties of men and fortune. Their lot brought them into contact with personages of whom we read only in books, who seem alive, as I read in the Virginians' letters regarding them, whose voices I almost fancy I hear, as I read the yellow pages written scores of years since, blotted with the boyish tears of disappointed passion, dutifully despatched after famous balls and ceremonies of the grand Old World, scribbled by camp-fires, or out of prison; nay, there is one that has a bullet through it, and of which a greater portion of the text is blotted out with the blood of the bearer.

These letters had probably never been preserved, but for the affectionate thrift of one person, to whom they never failed in their dutiful correspondence. Their mother kept all her sons' letters, from the very first, in which Henry, the younger of the twins, sends his love to his brother, then ill of a sprain at his grandfather's house of Castlewood, in Virginia, and thanks his grandpapa for a horse which he rides with his tutor, down to the last, "from my beloved son," which reached her but a few hours before her death. The venerable lady never visited Europe, save once with her parents in the reign of George the Second; took refuge in Richmond when the house of Castlewood was burned down during the war; and was called Madam Esmond ever after that event; never caring much for the name or family of Warrington, which she held in very slight estimation as compared to her own....