The Virginian, a Horseman of the Plains 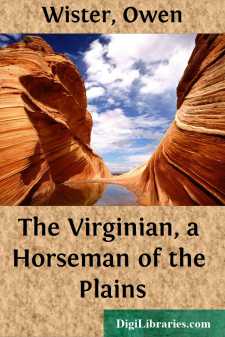 Add to My Favorites
Published: 8 years ago
Downloads: 50
Rating: (0 Votes)

THE VIRGINIAN I. ENTER THE MAN

Some notable sight was drawing the passengers, both men and women, to the window; and therefore I rose and crossed the car to see what it was. I saw near the track an enclosure, and round it some laughing men, and inside it some whirling dust, and amid the dust some horses, plunging, huddling, and dodging. They were cow ponies in a corral, and one of them would not be caught, no matter who threw the rope. We had plenty of time to watch this sport, for our train had stopped that the engine might take water at the tank before it pulled us up beside the station platform of Medicine Bow. We were also six hours late, and starving for entertainment. The pony in the corral was wise, and rapid of limb. Have you seen a skilful boxer watch his antagonist with a quiet, incessant eye? Such an eye as this did the pony keep upon whatever man took the rope. The man might pretend to look at the weather, which was fine; or he might affect earnest conversation with a bystander: it was bootless. The pony saw through it. No feint hoodwinked him. This animal was thoroughly a man of the world. His undistracted eye stayed fixed upon the dissembling foe, and the gravity of his horse-expression made the matter one of high comedy. Then the rope would sail out at him, but he was already elsewhere; and if horses laugh, gayety must have abounded in that corral. Sometimes the pony took a turn alone; next he had slid in a flash among his brothers, and the whole of them like a school of playful fish whipped round the corral, kicking up the fine dust, and (I take it) roaring with laughter. Through the window-glass of our Pullman the thud of their mischievous hoofs reached us, and the strong, humorous curses of the cow-boys. Then for the first time I noticed a man who sat on the high gate of the corral, looking on. For he now climbed down with the undulations of a tiger, smooth and easy, as if his muscles flowed beneath his skin. The others had all visibly whirled the rope, some of them even shoulder high. I did not see his arm lift or move. He appeared to hold the rope down low, by his leg. But like a sudden snake I saw the noose go out its length and fall true; and the thing was done. As the captured pony walked in with a sweet, church-door expression, our train moved slowly on to the station, and a passenger remarked, "That man knows his business."

But the passenger's dissertation upon roping I was obliged to lose, for Medicine Bow was my station. I bade my fellow-travellers good-by, and descended, a stranger, into the great cattle land. And here in less than ten minutes I learned news which made me feel a stranger indeed.

My baggage was lost; it had not come on my train; it was adrift somewhere back in the two thousand miles that lay behind me. And by way of comfort, the baggage-man remarked that passengers often got astray from their trunks, but the trunks mostly found them after a while. Having offered me this encouragement, he turned whistling to his affairs and left me planted in the baggage-room at Medicine Bow....