The Virgin of the Sun 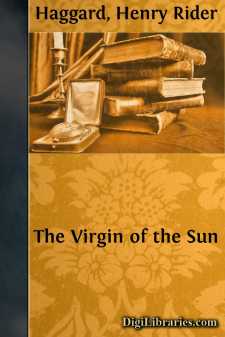 Some five-and-thirty years ago it was our custom to discuss many matters, among them, I think, the history and romance of the vanished Empires of Central America.

In memory of those far-off days will you accept a tale that deals with one of them, that of the marvellous Incas of Peru; with the legend also that, long before the Spanish Conquerors entered on their mission of robbery and ruin, there in that undiscovered land lived and died a White God risen from the sea?

THE VIRGIN OF THE SUN INTRODUCTORY

There are some who find great interest, and even consolation, amid the worries and anxieties of life in the collection of relics of the past, drift or long-sunk treasures that the sea of time has washed up upon our modern shore.

The great collectors are not of this class. Having large sums at their disposal, these acquire any rarity that comes upon the market and add it to their store which in due course, perhaps immediately upon their deaths, also will be put upon the market and pass to the possession of other connoisseurs. Nor are the dealers who buy to sell again and thus grow wealthy. Nor are the agents of museums in many lands, who purchase for the national benefit things that are gathered together in certain great public buildings which perhaps, some day, though the thought makes one shiver, will be looted or given to the flames by enemies or by furious, thieving mobs.

Those that this Editor has in mind, from one of whom indeed he obtained the history printed in these pages, belong to a quite different category, men of small means often, who collect old things, for the most part at out-of-the-way sales or privately, because they love them, and sometimes sell them again because they must. Frequently these old things appeal, not because of any intrinsic value that they may have, not even for their beauty, for they may be quite unattractive even to the cultivated eye, but rather for their associations. Such folk love to reflect upon and to speculate about the long-dead individuals who have owned the relics, who have supped their soup from the worn Elizabethan spoon, who have sat at the rickety oak table found in a kitchen or an out-house, or upon the broken, ancient chair. They love to think of the little children whose skilful, tired hands wrought the faded sampler and whose bright eyes smarted over its innumerable stitches.

Who, for instance, was the May Shore ("Fairy" broidered in a bracket underneath, was her pet name), who finished yonder elaborate example on her tenth birthday, the 1st of May—doubtless that is where she got her name—in the year 1702, and on what far shore does she keep her birthdays now? None will ever know. She has vanished into the great sea of mystery whence she came, and there she lives and has her being, forgotten upon earth, or sleeps and sleeps and sleeps. Did she die young or old, married or single?...