The Violin Its Famous Makers and Their Imitators 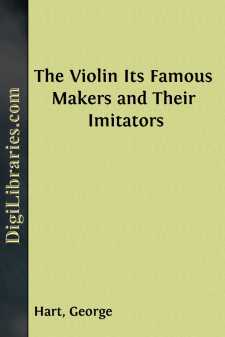 PREFACE TO THE ENLARGED AND REVISED EDITION

The favourable reception accorded to the previous editions of this work has not only added greatly to the pleasure attending the preparation of a new and revised edition, but has encouraged me to spare no effort within my power to render the volume as interesting and complete as possible. In making these endeavours, the bulk of the book has been necessarily increased by additional information, spread over all the sections of the work, but chiefly on those which treat of the Early History of the leading instrument, and the Italian branches of the subject.

It is in connection with the Italian divisions of the book that the reader will discover, I venture to hope, information which he will regard as interesting in its character, besides being of some historical value. The greater part of this new matter has been obtained from original MSS. belonging to the trustees of the Civic Museum at Cremona, which Institution is located in the palace bequeathed to the citizens, together with its contents, by the Marchese Ponzoni. In the year 1872, Dr. F. Robolotti, the learned historiographer of the town, and a distinguished physician, and the Marchese Senatore Araldi Erizzo, presented to the Institution referred to an important collection of rare books and documents illustrative of the history of the City of Cremona. Among these are two sets of MSS., numbered respectively 729 and 431, the contents of which shed much light on the Italian sections of our subject, and constitute the source of the principal portion of the additional information contained in the following pages. The first-named MS. is the work of Don Desiderio Arisi, a monk of the order of St. Jerome, who in the quiet of his cell in the Convent of St. Sigismondo set himself the task of writing brief notices of Cremonese worthies. The MS. is dated 1720, and includes a most interesting account of the patronage enjoyed by Antonio Stradivari, together with several items of information of more or less worth, relative to the famous Violin-maker. In passing, it may be mentioned that Don Desiderio Arisi was intimate with Stradivari, and gained his knowledge of the facts he recorded from the artist himself. The second-named MSS., from which extracts have been made, are dated 1823. These contain references to the principal makers of Cremona, combined with critical remarks on their works from the pen of Vincenzo Lancetti, a Cremonese poet and biographer. The information contained in these MSS. was chiefly received from Count Cozio di Salabue in the course of correspondence between him and Lancetti.

Nearly the whole of the extracts to which the reader's attention has been directed were given to me as far back as the year 1875, when the original edition of this work was in the press. Finding it impossible to make adequate use of them, in consequence of the volume being partly printed, I decided to insert a few items at the end of the notice of Antonio Stradivari, and to hold over the remainder in order to distribute the information among the notices of the several makers in a future edition....