The Vikings of Helgeland The Prose Dramas Of Henrik Ibsen, Vol. III. 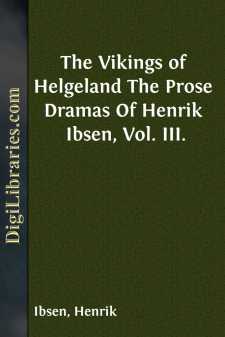 (A rocky coast, running precipitously down to the sea at the back. To the left, a boat-house; to the right, rocks and pine-woods. The masts of two war-ships can be seen down in the cove. Far out to the right, the ocean, dotted with reefs and rocky islands; the sea is running high; it is a stormy snow-grey winter day.)

(SIGURD comes up from the ships; he is clad in a white tunic with a silver belt, a blue cloak, cross-gartered hose, untanned shoes, and a steel cap; at his side hangs a short sword. ORNULF comes in sight immediately afterwards, up among the rocks, clad in a dark lamb-skin tunic with a breastplate and greaves, woollen stockings, and untanned shoes; over his shoulders he has a cloak of brown frieze, with the hood drawn over his steel cap, so that his face is partly hidden. He is very tall, and massively built, with a long white beard, but somewhat bowed by age; his weapons are a round shield, sword, and spear.

SIGURD (enters first, looks around, sees the boat-shed, goes quicklyup to it, and tries to burst open the door.)

ORNULF (appears among the rocks, starts on seeing SIGURD, seems torecognise him, descends and cries:) Give place, Viking!

SIGURD (turns, lays his hand on his sword, and answers:) 'Twere thefirst time if I did!

ORNULF. Thou shalt and must! I have need of the shelter for mystiff-frozen men.

SIGURD. Then must outlaws be highly prized in Helgeland!

SIGURD. Now will it go ill with thee, old man!

(ORNULF rushes upon him; SIGURD defends himself.)    (DAGNY and some of SIGURD'S men come up from the strand; Ornulf's      six sons appear on the rocks to the right.)

DAGNY (who is a little in front, clad in a red kirtle, blue cloak, and fur hood, calls down to the ships:) Up, all Sigurd's men! My husband is fighting with a stranger!

SIGURD (to his men). Hold! I can master him alone!

ORNULF (to his sons). Let me fight in peace! (Rushes in uponSIGURD.) I will see thy blood!

SIGURD. First see thine own! (Wounds him in the arm so that hisspear falls.)

SIGURD (smiling). Then were his shame his glory!

ORNULF'S SONS (with a cry of wonder). Sigurd himself! Sigurdthe Strong!

ORNULF. But sharper was thy stroke that night thou didst bear awayDagny, my daughter. (Casts his hood back.)

SIGURD AND HIS MEN. Ornulf of the Fiords!

DAGNY (glad, yet uneasy). My father and my brothers!

SIGURD. Stand thou behind me.

ORNULF. Nay, no need. (Approaching SIGURD.) I knew thy face as soon as I was ware of thee, and therefore I stirred the strife; I was fain to prove the fame that tells of thee as the stoutest man of his hands in Norway. Henceforth let peace be between us....