The Vee-Boers A Tale of Adventure in Southern Africa 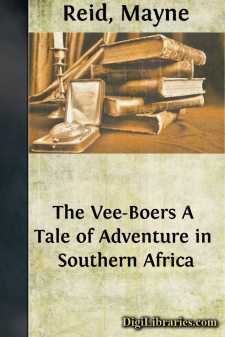 A vast plain, seemingly bounded but by the horizon; treeless, save where a solitary cameel-doorn (Note 1) spreads its feathered leaves, or a clump of arborescent aloes, mingled with rigid-stemmed euphorbias, breaks the continuity of its outline. These types of desert vegetation but proclaim its sterility, which is further evinced by tufts of whiteish withered grass, growing thinly between them.

Over it three waggons are moving; immense vehicles with bodies above four yards in length, surrounded by an arching of bamboo canes covered with canvas. To each is attached eight pairs of long-horned oxen, with a driver seated on the box, who flourishes a whip, in length like a fishing-rod; another on foot alongside, wielding the terrible jambok, while at the head of the extended team marches the “foreloper,” reim in hand, guiding the oxen along the track.

Half a score horsemen ride here and there upon the flanks, with three others in advance; and bringing up the rear is a drove of milch cows—some with calves at the foot—and a flock of fat-tailed sheep, their tails full fifty pounds in weight, and trailing on the ground.

The cows and sheep are in charge of ten or a dozen dark-skinned herdsmen, most of them all but naked; while a like number of large wolfish-looking dogs completes the list of living things visible outside the waggons. But, were the end curtains raised, under their tilts would be seen women with children—of both sexes and all ages—in each the members of a single family, its male head excepted.

Of the last there are three, corresponding to the number of the waggons, of which they are the respective proprietors—the three men riding in advance. Their names, Jan Van Dorn, Hans Blom, and Klaas Rynwald. All Dutch names, and Dutch are they who bear them, at least by descent, for the scene is Southern Africa, and they are Boers.

Not of the ordinary class, though, as may be told by their large accompaniment of unattached cattle and sheep—over a hundred of the former, and three times as many of the latter. These, with other signs well-known to South Africans, proclaim them to be Vee-Boers (Note 2).

They are far away from any settlement of civilised or white men, the nearest being their own frontier town, Zoutpansberg, in the Transvaal, from which they are distant full three hundred miles northward. Nor are they in Transvaalian territory, but that of the Tebele, beyond the Limpopo river, and journeying on north.

Why they are there calls for explanation, and a word will suffice. The world has of late heard much of the Transvaal Republic and its brave people; how distasteful to them was annexation to the English Government; indeed, so repugnant, that many plucked up the rooftrees they had but lately planted, and were off again, scarce thinking or caring whither, so long as they got beyond the reach of British rule.

It is on record—a painful one—that many of those political fugitives passed through hardships scarce conceivable, and not a few perished by the way—miserably perished, the victims of fatigue, hunger, and thirst....