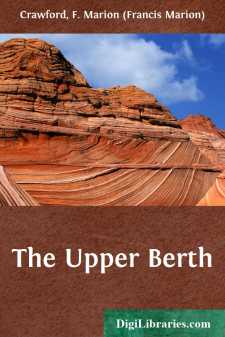 Somebody asked for the cigars. We had talked long, and the conversation was beginning to languish; the tobacco smoke had got into the heavy curtains, the wine had got into those brains which were liable to become heavy, and it was already perfectly evident that, unless somebody did something to rouse our oppressed spirits, the meeting would soon come to its natural conclusion, and we, the guests, would speedily go home to bed, and most certainly to sleep. No one had said anything very remarkable; it may be that no one had anything very remarkable to say. Jones had given us every particular of his last hunting adventure in Yorkshire. Mr. Tompkins, of Boston, had explained at elaborate length those working principles, by the due and careful maintenance of which the Atchison, Topeka, and Santa Fé Railroad not only extended its territory, increased its departmental influence, and transported live stock without starving them to death before the day of actual delivery, but, also, had for years succeeded in deceiving those passengers who bought its tickets into the fallacious belief that the corporation aforesaid was really able to transport human life without destroying it. Signor Tombola had endeavoured to persuade us, by arguments which we took no trouble to oppose, that the unity of his country in no way resembled the average modern torpedo, carefully planned, constructed with all the skill of the greatest European arsenals, but, when constructed, destined to be directed by feeble hands into a region where it must undoubtedly explode, unseen, unfeared, and unheard, into the illimitable wastes of political chaos.

It is unnecessary to go into further details. The conversation had assumed proportions which would have bored Prometheus on his rock, which would have driven Tantalus to distraction, and which would have impelled Ixion to seek relaxation in the simple but instructive dialogues of Herr Ollendorff, rather than submit to the greater evil of listening to our talk. We had sat at table for hours; we were bored, we were tired, and nobody showed signs of moving.

Somebody called for cigars. We all instinctively looked towards the speaker. Brisbane was a man of five-and-thirty years of age, and remarkable for those gifts which chiefly attract the attention of men. He was a strong man. The external proportions of his figure presented nothing extraordinary to the common eye, though his size was above the average. He was a little over six feet in height, and moderately broad in the shoulder; he did not appear to be stout, but, on the other hand, he was certainly not thin; his small head was supported by a strong and sinewy neck; his broad muscular hands appeared to possess a peculiar skill in breaking walnuts without the assistance of the ordinary cracker, and, seeing him in profile, one could not help remarking the extraordinary breadth of his sleeves, and the unusual thickness of his chest. He was one of those men who are commonly spoken of among men as deceptive; that is to say, that though he looked exceedingly strong he was in reality very much stronger than he looked....