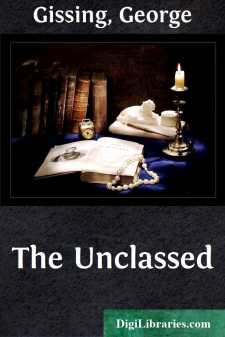 There was strange disorder in Miss Rutherford's schoolroom, wont to be the abode of decorum. True, it was the gathering-time after the dinner-hour, and Miss Rutherford herself was as yet out of sight; but things seemed to be going forward of a somewhat more serious kind than a game of romps among the children. There were screams and sobbings, hysterical cries for help; some of the little girls were crowding round an object in one corner of the room, others appeared to be getting as far away from it as possible, hiding their pale faces in their hands, or looking at one another with terrified eyes. At length one more thoughtful than the rest sped away out of the room, and stood at the bottom of the stairs, calling out her teacher's name as loud as she could. A moment, and Miss Rutherford came hastening down, with alarmed aspect, begging to be told what was the matter. But the summoner had turned and fled at the first sight of the lady's garments. Miss Rutherford darted into the schoolroom, and at once there was quietness, save for half-choked sobs here and there, and a more ominous kind of moaning from the crowded corner.

"Gracious goodness, children, what is it? Who's that lying on the floor? Harriet Smales! What ever has happened?"

The cluster of children had fallen aside, exposing a strange picture. On the ground lay a girl of twelve, her face deadly pale, save in the places where it was dabbled with fresh blood, which still streamed from a gash on the right side of her forehead. Her eyes were half opened; she was just recovering consciousness; a moan came from her at intervals. She had for support the lap and arms of a little girl, perhaps two years younger than herself. Heedless of the flowing blood, this child was pressing her pale cheek against that of the wounded one, whose name she kept murmuring in pitiful accents, mixed with endearing epithets. So unconscious was she of all around, that the falling back of the other children did not cause her to raise her eyes; neither was she aware of Miss Rutherford's first exclamations, nor yet of the question which was next addressed to her by the horrified schoolmistress.

Ida did not move, but seemed to tighten her embrace. The other pupils all looked fearfully hither and thither, but none ventured to speak.

"Ida!" repeated Miss Rutherford, dropping on her knees by the two, and beginning to wipe away some of the blood with her handkerchief. "Speak, child! Has some one gone for the doctor? How was it done?"

The face at length turned upon the questioner was almost as ghastly and red-stained as that it had been pressed against. But it had become self-controlled; the dark eyes looked straight forward with an expression marvellously full of meaning in one so young; the lips did not tremble as they spoke.

"I did it, Miss Rutherford. I have killed Harriet. I, and nobody else."