The Ultimate Criminal The American Negro Academy. Occasional Papers No. 17 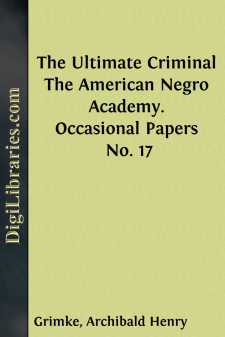 It is the fashion nowadays for every one with a stone in his hand to take a shy at the poor Negro on account of his sins of commission and omission. It is enough that some member of the race is caught flagrante delicto or merely on suspicion of evil doing to get himself into the public pillory and the rest of the colored people into our national rogues’ gallery, where they evoke instantly the loud lamentation of white saints and sinners alike, and the statistical and sophistical conclusions of a lot of fools and hypocrites. Now do not misunderstand me. I do not deny that Negroes commit crimes. Not at all, for I know full well that they do—altogether too many for their own good. But what I object to among other things is that America, because of the crimes of individual Negroes or because of the suspected crimes of individual Negroes, draws an omnibus indictment against the moral character of the whole race, which is monstrously unjust and wicked.

Who cares to inquire into the origin of Negro crime, or into the causes which have contributed mightily to produce the Negro criminal? The book of the Genesis of this man’s crimes awaits to be written by an impartial and sympathetic seeker after truth. The causes which have operated for fifty years to produce Negro criminals will some day, I trust, be traced without fear or bias to their source. I do not pretend to possess any scientific qualification for such a task, but I do intend in these imperfect remarks to try to indicate in outline merely the dismal stream of these causes during the last half century, hoping thereby to cast a little light on a dark and difficult subject: namely, how out of hostile and unequal social, industrial and political conditions Negro crime emerged and why Negro criminals abound.

To say that individuals and races are the creatures of circumstances—that they are the products of their social heredity and environment—is to state a commonplace in the accepted doctrines of science to-day. It is therefore perfectly safe to postulate that the greatest circumstance in the life of the Negro before emancipation was the institution of slavery. For it furnished for two and a half centuries both his social heredity and his environment, and so shaped his growth and character along moral, religious and industrial lines. Chattel slaves had no rights, the most rudimentary, which their southern masters were bound to respect. They did not, for example, possess that most elementary of rights, the ownership of self and of the products of their labor. They were the legal property of others and so were the products of their labor. They did not own the cabins they slept in or the clothes they wore or the food they ate or the tools they worked with or the air they breathed or the water they drank or the bit of ground that they were buried in at last, any more than did the cattle of those self same masters. The slave system owned the minds and bodies of its victims, who loved but had no legal title to their mates, or to the offspring who were born to them any more than did the cattle of the masters own their mates or the young which were born to them....