The Tyranny of the Dark 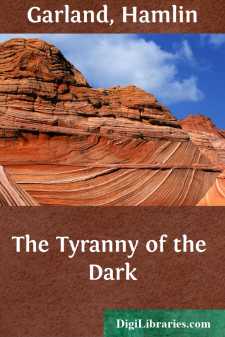 The village of Colorow is enclosed by a colossal amphitheatre of dove-gray stone, in whose niches wind-warped pines stand like spectators silent and waiting. Six thousand feet above the valley floor green and orange slopes run to the edges of perennial ice-fields, while farther away, and peering above these almost inaccessible defences, like tents of besieging Titans, rise three great mountains gleaming with snow and thunderous with storms. Altogether a stage worthy of some colossal drama rather than the calm slumber of a forgotten hamlet.

The railway enters the valley from the south by sinuously following the windings of a rushing, foam-white stream, and for many miles the engines cautiously feel their way among stupendous walls, passing haltingly over bridges hung perilously between perpendicular cliffs by slender iron rods, or creep like mountain-cats from ledge to ledge, so that when they have reached safe harbor beside the little red depot they never fail to pant and wheeze like a tired, gratified dog beside his master's door. Aside from the coming and going of these trains, the town is silent as the regarding pines.

The only other ways of entrance to this deep pocket lie over threadlike trails which climb the divide from Silver City and Toltec and Vermilion, and loop their terrifying courses down the declivities trod only by the sturdy burro or the agile, sure-footed mountain-horse. These wavering paths, worn deep and dusty once, are grass-grown now, for they were built in the days when silver was accounted a precious metal, and only an occasional hunter or prospector makes present use of them.

Colorow itself, once a flaming, tumultuous centre of miners, gamblers, and social outcasts, is now risen (or declined) to the quiet of a New England summer resort, supported partly by two or three big mines (whose white ore is streaked with gold), but more and more by the growing fame of its mountains and their medicinal springs, for these splendid peaks have their waters, hot and cold and sweet and bitter, whose healing powers are becoming known to an ever-growing number of those Americans who are minded to explore their native land.

This centre of aërial storms, these groups of transcendent summits, would be more widely known still, but for the singular sense of proprietorship with which each discoverer regards them. The lucky traveller who falls into this paradise is seized with a certain instant jealousy of it, and communicates his knowledge only to his family and his friends. Nevertheless, its fame spreads slowly, and each year new discoverers flock in growing numbers to the one little hotel and its ramshackle bath-house, so that the community once absolutely and viciously utilitarian begins to take timid account of its aesthetic surroundings, and here and there a little log-cabin (as appropriate to this land as the chalet to the Alps) is built beside the calling ripples of the river, while saddled horses, laden burros in long lines, and now and then a vast yellow or red ore-wagon creaking dolefully as it descends, still give evidence of the mining which goes on far up the zigzag trails towards the soaring, shining peaks of the Continental Divide.