The Two Wives Or, Lost and Won 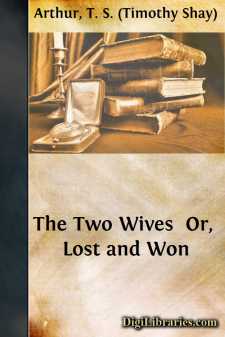 "YOU are not going out, John?" said Mrs. Wilkinson, looking up from the work she had just taken into her hands. There was a smile on her lips; but her eyes told, plainly enough, that a cloud was upon her heart.

Mrs. Wilkinson was sitting by a small work-table, in a neatly furnished room. It was evening, and a shaded lamp burned upon the table. Mr. Wilkinson, who had been reading, was standing on the floor, having thrown down his book and risen up hastily, as if a sudden purpose had been formed in his mind.

"I shall only be gone a little while, dear," returned Mr. Wilkinson, a slight air of impatience visible beneath his kind voice and manner.

"Don't go, John," said Mrs. Wilkinson, still forcing a smile to her countenance. "I always feel so lonely when you are away. We only have our evenings to be together; and I cannot bear then to be robbed of your company. Don't go out, John; that's a good, dear husband."

And Mrs. Wilkinson, in the earnestness of her desire to keep her husband at home, laid aside her sewing, and rising, approached and leaned her hands upon his shoulder, looking up with an affectionate, appealing expression into his face.

"You're a dear, good girl, Mary," said Mr. Wilkinson, tenderly, and he kissed the pure lips of his wife as he spoke. "I know it's wrong to leave you alone here. But, I won't be gone more than half an hour. Indeed I won't. See, now;" and he drew forth his watch; "it is just eight o'clock, and I will be home again precisely at half-past eight, to a minute."

Mrs. Wilkinson made no answer; but her husband saw that tears were in the eyes fixed so lovingly upon him.

"Now don't, love," said he, tenderly, "make so much of just half an hour's absence. I promised Elbridge that I would call around and see him about a little matter of business, and I must keep my word. I had forgotten the engagement until it crossed my mind while reading."

"If you have an engagement." There was a certain emphasis in the words of Mrs. Wilkinson that caused her husband to partly turn his face away.

"I have, dear. But for that, I should not think of leaving you alone."

Almost instinctively Mrs. Wilkinson withdrew the hands she had placed upon the shoulder of her husband, and receded from him a step or two; at the same time her face was bent downwards, and her eyes rested upon the floor.

For some moments Mr. Wilkinson stood as if in earnest debate with himself; then he said, in a cheerful, lively tone—

"Good-by, love. I shall only be gone half an hour." And turning away, left the room. He did not pause until he was in the street. Then a spirit of irresolution came over him, and he said to himself, as he moved slowly away,

"It isn't kind in me to leave Mary alone in this way; I know it isn't. But I want to see Elbridge; and, in fact, partly promised that I would call upon him this evening. True, I can say all I wish to say to him in the morning, and to quite as good purpose. But—"

Wilkinson, whose steps had been growing more and more deliberate, stopped....