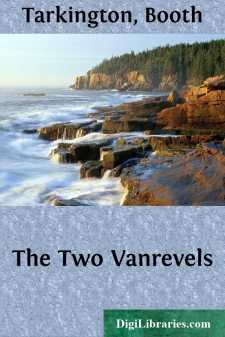 CHAPTER I. A Cat Can Do More than Look at a King

It was long ago in the days when men sighed when they fell in love; when people danced by candle and lamp, and did dance, too, instead of solemnly gliding about; in that mellow time so long ago, when the young were romantic and summer was roses and wine, old Carewe brought his lovely daughter home from the convent to wreck the hearts of the youth of Rouen.

That was not a far journey; only an afternoon's drive through the woods and by the river, in an April, long ago; Miss Betty's harp carefully strapped behind the great lumbering carriage, her guitar on the front seat, half-buried under a mound of bouquets and oddly shaped little bundles, farewell gifts of her comrades and the good Sisters. In her left hand she clutched a small lace handkerchief, with which she now and then touched her eyes, brimmed with the parting from Sister Cecilia, Sister Mary Bazilede, the old stone steps and all the girls: but for every time that she lifted the dainty kerchief to brush away the edge of a tear, she took a deep breath of the Western woodland air and smiled at least twice; for the years of strict inclosure within St. Mary's walls and still gardens were finished and done with, and at last the many-colored world flashed and danced in a mystery before her. This mystery was brilliant to the convent-girl because it contained men; she was eager to behold it.

They rumbled into town after sunset, in the fair twilight, the dogs barking before them, and everyone would have been surprised to know that Tom Vanrevel, instead of Mr. Crailey Gray, was the first to see her. By the merest accident, Tom was strolling near the Carewe place at the time; and when the carriage swung into the gates, with rattle and clink and clouds of dust at the finish, it was not too soon lost behind the shrubbery and trees for Tom to catch something more than a glimpse of a gray skirt behind a mound of flowers, and of a charming face with parted lips and dark eyes beneath the scuttle of an enormous bonnet. It happened—perhaps it is more accurate to say that Tom thought it happened—that she was just clearing away her veil when he turned to look. She blushed suddenly, so much was not to be mistaken; and the eyes that met his were remarkable for other reasons than the sheer loveliness of them, in that, even in the one flash of them he caught, they meant so many things at one time. They were sparkling, yet mournful; and they were wistful, although undeniably lively with the gayest comprehension of the recipient of their glance, seeming to say, "Oh, it's you, young man, is it!" And they were shy and mysterious with youth, full of that wonder at the world which has the appearance, sometimes, of wisdom gathered in the unknown out of which we came. But, above all, these eyes were fully conscious of Tom Vanrevel.

Without realizing what he did, Mr. Vanrevel stopped short. He had been swinging a walkingstick, which, describing a brief arc, remained poised half-way in its descent. There was only that one glance between them; and the carriage disappeared, leaving a scent of spring flowers in the air....