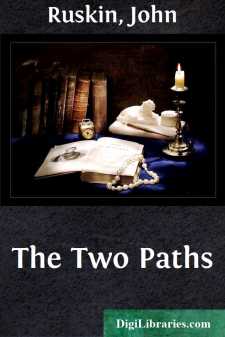 The following addresses, though spoken at different times, are intentionally connected in subject; their aim being to set one or two main principles of art in simple light before the general student, and to indicate their practical bearing on modern design. The law which it has been my effort chiefly to illustrate is the dependence of all noble design, in any kind, on the sculpture or painting of Organic Form.

This is the vital law; lying at the root of all that I have ever tried to teach respecting architecture or any other art. It is also the law most generally disallowed.

I believe this must be so in every subject. We are all of us willing enough to accept dead truths or blunt ones; which can be fitted harmlessly into spare niches, or shrouded and coffined at once out of the way, we holding complacently the cemetery keys, and supposing we have learned something. But a sapling truth, with earth at its root and blossom on its branches; or a trenchant truth, that can cut its way through bars and sods; most men, it seems to me, dislike the sight or entertainment of, if by any means such guest or vision may be avoided. And, indeed, this is no wonder; for one such truth, thoroughly accepted, connects itself strangely with others, and there is no saying what it may lead us to.

And thus the gist of what I have tried to teach about architecture has been throughout denied by my architect readers, even when they thought what I said suggestive in other particulars. "Anything but that. Study Italian Gothic?—perhaps it would be as well: build with pointed arches?—there is no objection: use solid stone and well-burnt brick?— by all means: but—learn to carve or paint organic form ourselves! How can such a thing be asked? We are above all that. The carvers and painters are our servants—quite subordinate people. They ought to be glad if we leave room for them."

Well: on that it all turns. For those who will not learn to carve or paint, and think themselves greater men because they cannot, it is wholly wasted time to read any words of mine; in the truest and sternest sense they can read no words of mine; for the most familiar I can use—"form," "proportion," "beauty," "curvature," "colour"—are used in a sense which by no effort I can communicate to such readers; and in no building that I praise, is the thing that I praise it for, visible to them.

And it is the more necessary for me to state this fully; because so- called Gothic or Romanesque buildings are now rising every day around us, which might be supposed by the public more or less to embody the principles of those styles, but which embody not one of them, nor any shadow or fragment of them; but merely serve to caricature the noble buildings of past ages, and to bring their form into dishonour by leaving out their soul.

The following addresses are therefore arranged, as I have just stated, to put this great law, and one or two collateral ones, in less mistakeable light, securing even in this irregular form at least clearness of assertion....