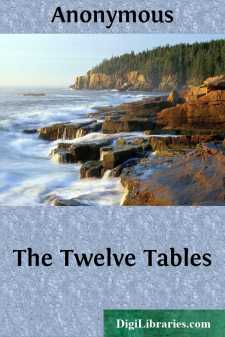 The legal history of Rome begins properly with the Twelve Tables. It is strictly the first and the only Roman code,[1] collecting the earliest known laws of the Roman people and forming the foundation of the whole fabric of Roman Law. Its importance lies in the fact that by its promulgation was substituted for an unwritten usage, of which the knowledge had been confined to some citizens of the community, a public and written body of laws, which were easily accessible to and strictly binding on all citizens of Rome.

Till the close of the republican period (509 B.C.-27 B.C.) the Twelve Tables were regarded as a great legal charter. The historian Livy (59 B.C.-A.D. 17) records: "Even in the present immense mass of legislation, where laws are piled on laws, the Twelve Tables still form the fount of all public and private jurisprudence."[2]

This celebrated code, after its compilation by a commission of ten men (decemviri), who composed in 451 B.C. ten sections and two sections in 450 B.C., and after its ratification by the (then) principal assembly (comitia centuriata) of the State in 449 B.C., was engraved on twelve bronze[3] tablets (whence the name Twelve Tables), which were attached to the Rostra before the Curia in the Forum of Rome. Though this important witness of the national progress probably was destroyed during the Gallic occupation of Rome in 387 B.C., yet copies must have been extant, since Cicero (106 B.C.-43 B.C.) says that in his boyhood schoolboys memorized these laws "as a required formula."[4] However, now no part of the Twelve Tables either in its original form or in its copies exists.

The surviving fragments of the Twelve Tables come from the writings of late Latin writers and fall into these four types:

(1) Fragments which seem to contain the original words (or nearly so) of a law, "modernized" in spelling and to some extent in formation;

(2) Fragments which are fused with the context of the quoter, but which otherwise exhibit little distortion;

(3) Fragments which not only are fused with the sentences of the citer but also are much distorted, although these preserve in paraphrase the purport of the provisions of a law;

Only in very few cases do we know or can we conjecture the number of the tablet whereon any law appeared. Consequently of the arrangement very little is ascertainable and the attribution of some items to certain tablets is debatable. The probable order of the fragments, which total over 115, has been inferred from various statements and from other indications of ancient authors.

The amount of detail apparently varies either with the importance of the matter or with the degree of general or particular knowledge of the subject supposed by the commissioners to be held commonly by the citizens. The style is characterized by such simplicity and by such brevity that the meaning in some instances borders upon obscurity,—at least so far as modern interpretation is concerned....