The Turmoil, a novel 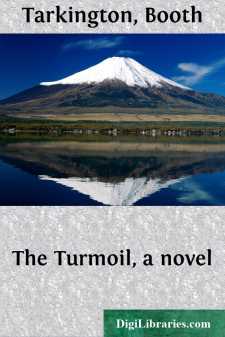 There is a midland city in the heart of fair, open country, a dirty and wonderful city nesting dingily in the fog of its own smoke. The stranger must feel the dirt before he feels the wonder, for the dirt will be upon him instantly. It will be upon him and within him, since he must breathe it, and he may care for no further proof that wealth is here better loved than cleanliness; but whether he cares or not, the negligently tended streets incessantly press home the point, and so do the flecked and grimy citizens. At a breeze he must smother in the whirlpools of dust, and if he should decline at any time to inhale the smoke he has the meager alternative of suicide.

Not so long ago as a generation, there was no panting giant here, no heaving, grimy city; there was but a pleasant big town of neighborly people who had understanding of one another, being, on the whole, much of the same type. It was a leisurely and kindly place—"homelike," it was called—and when the visitor had been taken through the State Asylum for the Insane and made to appreciate the view of the cemetery from a little hill, his host's duty as Baedeker was done. The good burghers were given to jogging comfortably about in phaetons or in surreys for a family drive on Sunday. No one was very rich; few were very poor; the air was clean, and there was time to live.

But there was a spirit abroad in the land, and it was strong here as elsewhere—a spirit that had moved in the depths of the American soil and labored there, sweating, till it stirred the surface, rove the mountains, and emerged, tangible and monstrous, the god of all good American hearts—Bigness. And that god wrought the panting giant.