The Turkish Jester or, The Pleasantries of Cogia Nasr Eddin Effendi 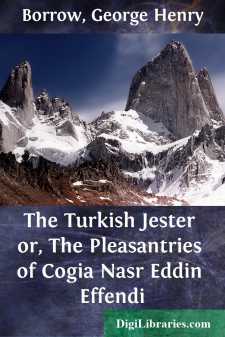 ‘A breeze, which pleasant stories bears,Relicks of long departed years.’

The story goes, one of the stories of a hundred, that Cogia Nasr Eddin Efendi one day ascending into the pulpit to preach, said, ‘O believers, do ye not know what I am going to say to you?’  The congregation answered, ‘Dear Cogia Efendi, we do not know.’  Then said the Cogia, ‘What shall I say to you until you do know?’  One day the Cogia ascending again into the pulpit, said, ‘O Mussulmen, do ye not know what I am going to say to you?’  ‘We do know,’ they replied.  Then said the Cogia, ‘Some of ye do know already, what should I have to say to you?’  Then descending from the chair he went out.  The assembly separated quite astonished, and, when they were out, continued to say, ‘Which are those of us who know?  Which are those who do not know?’  The Cogia one day again mounting the chair in the same manner, said, ‘O brothers, when I said to ye, “Do you know what I shall say?” there were some who said, “We know,” others said, “We do not.”  It were now well that those among ye who knew what the Cogia said should teach those that did not.’

One day Cogia Nasr Eddin Efendi said, ‘O Mussulmen, give thanks to God Most High that He did not give the camel wings; for, had He given them, they would have perched upon your houses and chimneys, and have caused them to tumble upon your heads.’

One night the Cogia dreamt that he was given nine aspres, whereupon the Cogia said, ‘O now pray make them up ten’; afterwards he said, ‘Make them up eleven,’ and then presently, a dispute having arisen, he awoke and saw that in his hand he had nothing, thereupon closing his eyes anew and stretching out his hands, he said, ‘Well, well, I shall be content with nine aspres.’

One day the Cogia went out into the plain, and as he was going along he suddenly saw some men on horseback coming towards him.  Cogia Efendi, in a great hurry, set off towards a cemetery, and having reached it took off his clothes, and entering into a tomb lay down.  The horsemen, on seeing the Cogia run away, followed him to the place where he lay, and said, ‘O fellow, why do you lie here?’  Cogia Efendi, finding nothing else to say, replied, ‘I am one of the buried people, but came here to walk.’

Cogia Efendi one day went into a garden, pulled up some carrots and turnips and other kinds of vegetables, which he found, putting some into a sack and some into his bosom; suddenly the gardener coming up, laid hold of him, and said, ‘What are you seeking here?’  The Cogia, being in great consternation, not finding any other reply, answered, ‘For some days past a great wind has been blowing, and that wind blew me hither.’  ‘But who pulled up these vegetables?’ said the gardener.  ‘As the wind blew very violently,’ replied the Cogia, ‘it cast me here and there, and whatever I laid hold of in the hope of saving myself remained in my hands.’  ‘Ah,’ said the gardener, ‘but who filled the sack with them?’  ‘Well,’ said the Cogia, ‘that is the very question I was about to ask myself when you came up.’

One day Cogia Efendi, on whom God be merciful, went to the city of Conia, and going into a pastry-cook’s shop, seized hold of a tart, and saying, ‘In the Name of God,’ began to eat it.  The pastry-cook cried out, ‘Halloa, fellow, what are you about?’ and fell to beating him.  The Cogia said, ‘Oh what a fine country is this of Conia, in which, whilst a man eats a tart, they put in a blow as a digester for every morsel.’

Cogia Nasr Eddin, at the time of the Holy Ramadan, thought to himself, ‘What must I do in order to hold the fast in conformity with the people?  I must prepare an earthen pot, and every day put a stone into it, and when thirty days are completed I may hold my Beiram.’  So he commenced placing stones in the pot, one every day.  Now it happened one day that a daughter of the Cogia cast a handful of stones into the pot, and a little time after some people asked the Cogia, ‘What day of the month is it to-day?’  Now it happened to be the twenty-fifth.  The Cogia, however, said to them, ‘Have patience and I will see’; and going to his house and emptying the pot, perceived that there were a hundred and twenty stones in it.  Says the Cogia to himself, ‘If I tell the people all this number they will call me a fool.’  So going to them he said, ‘This day is the forty-fifth day of the month.’  But, said they, ‘O Cogia, a month has in all but thirty days, so how can you say that to-day is the forty-fifth?’  ‘I spoke quite within bounds,’ said the Cogia.  ‘If you were to see the account in the pot you would find that to-day is the hundred and twentieth.’

One day the Cogia was asked, ‘When there is a new moon, what becomes of the old one?’  ‘They make forty stars out of each,’ said the Cogia....