The Truth About Woman 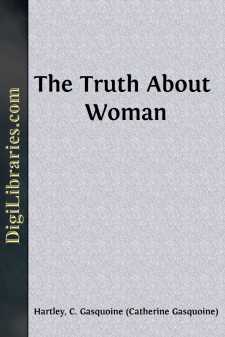 Add to My Favorites
Published: 9 years ago
Downloads: 69
Rating: (1 Vote)

It is very difficult to write a preface to a work which is expressly intended as a revelation of the faith of the writer. The successive stages of thought and emotion that have been passed through are still too near, and one feels too deeply. I have made several futile attempts to concentrate into a short note the Truths about Woman that I have tried to convey in my book. I find it impossible to do this. The explanation of one's own book would really require the writing of another book, as Mr. Bernard Shaw has proved to us in his delightful prefaces. But to do this one must be freed altogether from the limits of length and time. The fragments of what I wish to say would be of no service to any one.

I then tried to place myself, as it were, outside the book, and to look at it as a stranger might. But the difficulties here were even greater. I grew so interested in criticising my own opinions that my notes soon outran the possibilities of a preface. In this spirit of genuine discrimination, I became aware how easy it would be for any one who does not share my faith to find apparent contradictions of statement and errors in thought—much that is feeble here, extravagant there; to notice some salient fault and to take it as decisive of the writer's incompetence. I am tempted to point these out myself to guide and protect the reader.

Now that my book is done I feel that I have touched only the veriest fringe of a vast subject. But one thing I may say, I have tried to express the truth as I have come to see it. The conception I have of Woman is not new; it is very old. And for that reason it will be rejected by many women to-day. At present the inspiration towards freedom in the Woman's Movement has involved a tendency to follow individual paths, without waiting to consider to what end they lead. There has arisen a sort of glamour about freedom. No one of us can be free, for no one of us stands alone; we are all members one of another. And woman's destiny is rooted in the race. This, rightly considered, is the most vital of all vital facts. I appeal to women to realise more clearly their true place and gifts, as representing that original racial motherhood, out of which the masculine and feminine characters have arisen.

My book is a statement of my faith in Woman as the predominant and responsible partner in the relations of the sexes. To such a belief my opinion was driven, as it were, not deliberately set from the beginning. The time when the resolve to write a book upon Woman first took a place in my thoughts goes back for many years. The child of a Puritan father, who died for the faith in which he believed, the desire to teach was born in my blood. Our character is forged in the past, we cannot escape our inheritance. I began my work as the head-mistress of a school for girls. I was young in experience and very ignorant of life. In my enthusiasm I was quite unconscious of my own limitations, I believed that I was able to train up a new type of free woman....