The True-Born Englishman A Satire 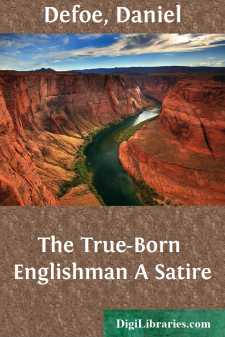 It is not that I see any reason to alter my opinion in any thing I have writ, which occasions this epistle; but I find it necessary for the satisfaction of some persons of honour, as well as wit, to pass a short explication upon it; and tell the world what I mean, or rather, what I do not mean, in some things wherein I find I am liable to be misunderstood.

I confess myself something surpris'd to hear that I am taxed with bewraying my own nest, and abusing our nation, by discovering the meanness of our original, in order to make the English contemptible abroad and at home; in which, I think, they are mistaken: for why should not our neighbours be as good as we to derive from? And I must add, that had we been an unmix'd nation, I am of opinion it had been to our disadvantage: for to go no farther, we have three nations about us as clear from mixtures of blood as any in the world, and I know not which of them I could wish ourselves to be like; I mean the Scots, the Welsh, and the Irish; and if I were to write a reverse to the Satire, I would examine all the nations of Europe, and prove, that those nations which are most mix'd, are the best, and have least of barbarism and brutality among them; and abundance of reasons might be given for it, too long to bring into a Preface.

But I give this hint, to let the world know, that I am far from thinking, 'tis a Satire upon the English nation, to tell them, they are derived from all the nations under heaven; that is, from several nations. Nor is it meant to undervalue the original of the English, for we see no reason to like them worse, being the relicts of Romans, Danes, Saxons and Normans, than we should have done if they had remain'd Britons, that is, than if they had been all Welshmen.

But the intent of the Satire is pointed at the vanity of those who talk of their antiquity, and value themselves upon their pedigree, their ancient families, and being true-born; whereas 'tis impossible we should be true-born: and if we could, should have lost by the bargain.

These sort of people, who call themselves true-born, and tell long stories of their families, and like a nobleman of Venice, think a foreigner ought not to walk on the same side of the street with them, are own'd to be meant in this Satire. What they would infer from their long original, I know not, nor is it easy to make out whether they are the better or the worse for their ancestors: our English nation may value themselves for their wit, wealth and courage, and I believe few nations will dispute it with them; but for long originals, and ancient true-born families of English, I would advise them to wave the discourse. A true Englishman is one that deserves a character, and I have nowhere lessened him, that I know of; but as for a true-born Englishman, I confess I do not understand him.

From hence I only infer, that an Englishman, of all men, ought not to despise foreigners as such, and I think the inference is just, since what they are to-day, we were yesterday, and to-morrow they will be like us. If foreigners misbehave in their several stations and employments, I have nothing to do with that; the laws are open to punish them equally with natives, and let them have no favour.

But when I see the town full of lampoons and invectives against Dutchmen, only because they are foreigners, and the king reproached and insulted by insolent pedants, and ballad-making poets, for employing foreigners, and for being a foreigner himself, I confess myself moved by it to remind our nation of their own original, thereby to let them see what a banter is put upon ourselves in it; since speaking of Englishmen ab origine, we are really all foreigners ourselves....