The Trojan women of Euripides 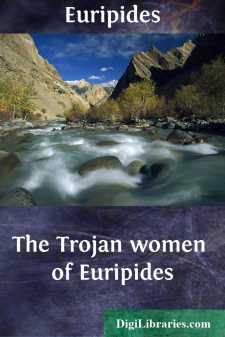 In his clear preface, Gilbert Murray says with truth that The Trojan Women, valued by the usage of the stage, is not a perfect play. "It is only the crying of one of the great wrongs of the world wrought into music." Yet it is one of the greater dramas of the elder world. In one situation, with little movement, with few figures, it flashes out a great dramatic lesson, the infinite pathos of a successful wrong. It has in it the very soul of the tragic. It even goes beyond the limited tragic, and hints that beyond the defeat may come a greater glory than will be the fortune of the victors. And thus through its pity and terror it purifies our souls to thoughts of peace.

Great art has no limits of locality or time. Its tidings are timeless, and its messages are universal. The Trojan Women was first performed in 415 B.C., from a story of the siege of Troy which even then was ancient history. But the pathos of it is as modern to us as it was to the Athenians. The terrors of war have not changed in three thousand years. Euripides had that to say of war which we have to say of it to-day, and had learned that which we are even now learning, that when most triumphant it brings as much wretchedness to the victors as to the vanquished. In this play the great conquest "seems to be a great joy and is in truth a great misery." The tragedy of war has in no essential altered. The god Poseidon mourns over Troy as he might over the cities of to-day, when he cries:

"How are ye blind,Ye treaders down of cities, ye that castTemples to desolation, and lay wasteTombs, the untrodden sanctuaries where lieThe ancient dead; yourselves so soon to die!"

To the cities of this present day might the prophetess Cassandra speak her message:

"Would ye be wise, ye Cities, fly from war!Yet if war come, there is a crown in deathFor her that striveth well and perishethUnstained: to die in evil were the stain!"

A throb of human sympathy as if with one of our sisters of to-day comes to us at the end, when the city is destroyed and its queen would throw herself, living, into its flames. To be of the action of this play the imagination needs not to travel back over three thousand years of history. It can simply leap a thousand leagues of ocean.

If ever wars are to be ended, the imagination of man must end them. To the common mind, in spite of all its horrors, there is still something glorious in war. Preachers have preached against it in vain; economists have argued against its wastefulness in vain. The imagination of a great poet alone can finally show to the imagination of the world that even the glories of war are an empty delusion. Euripides shows us, as the centre of his drama, women battered and broken by inconceivable tortureвЂ”the widowed Hecuba, Andromache with her child dashed to death, Cassandra ravished and made madвЂ”yet does he show that theirs are the unconquered and unconquerable spirits. The victorious men, flushed with pride, have remorse and mockery dealt out to them by those they fought for, and go forth to unpitied death....