The Tricks of the Town: or, Ways and Means of getting Money 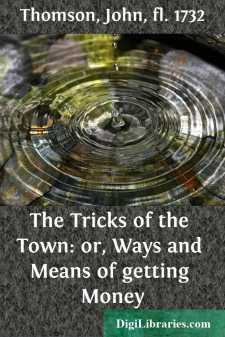 y Son get Money, said a wiser Man than you or I, honest Reader: That is the Precept; but he went no farther, leaving the Business of Committee Men, Ways and Means, &c. to the peculiar Turn of Thought, or Biass of Invention of every individual Money-Getter. Of all the Methods made use of to attain this great End, I believe it will be allow'd that he who gains his point the easiest way, is the wisest Person: For instance, I know there are Mines of Gold and Silver in Peru and Mexico; but when one considers at what a very inconvenient distance these are, and what Toils and Dangers must be undergone before an Ingot of either can be pocketed, what is to be done in the Case? We cannot go to them, and they will not come to us. In this plunge of Affairs, we resolve to pick it up by Shillings, Crowns, Guineas, Moidores, &c. at home.

That the one half of this great over-grown Metropolis knows but little how the other is truly supported, is a Maxim, I believe, older than the Walls themselves; that a considerable number of Persons are daily employed and kept in constant pay to go about damaging and destroying all manner of wearing Apparel, when they can find an Opportunity of doing it without any Inconveniences to themselves, is a Fact that will admit of no manner of Dispute. I have been inform'd, that if a Coachman or Carter can decently dash a Gentleman or a Lady that are richly dress'd, when they are walking the Streets, over their Head and Ears, and make due Proof of the Fact, there is not a Draper or Mercer within half a Mile of the Place where the Exploit was perform'd, but who will readily tip the Man a Shilling for his Trouble.

Every body knows, that when a Foot-Soldier was taken in the Court of Requests at Westminster, bedaubing a noble Lord's new Suit of Clothes upon his Back, with a composition of Powders that in a Week's time would have render'd them not worth the acceptance of his Valet de Chambre; the honest Man, upon a very strict Examination before a Magistrate, was at last brought, though with great reluctancy, to confess his receiving a Salary of Thirty Pounds per Ann. from certain Drapers, Taylors, and Scowrers, for those kinds of Services.

A few Weeks since I happen'd into a very large promiscuous Company of Gentlemen and Tradesmen, at a Tavern near the Royal-Exchange; I had not been seated amongst them a Quarter of an Hour, before a Waiter came to top the Candles, and let a Snuff fall upon the Sleeve of my Coat, which instantly burnt a great hole in the Cloth. All the Satisfaction I had, was in calling him careless Rascal, and his begging my pardon. This was soon follow'd by a great Glass of Wine one of the Company let fall upon the Table, which wetted three or four Peoples Clothes pretty heartily. By and by a full Flask was overset, which put half a dozen more of us into the same pickle; so that nothing was heard for some time, but, Sir, I am heartily sorry; I beg your pardon; Mischances will happen, but I hope it won't stain; and the like. We were all up from our Chairs, wiping and cleaning one another. We were no sooner got into order again, and begun to be merry, forgetting what was past, but Supper came to be set upon the Table; when the Cook, in handing a Dish of Fish over our Shoulders, let fall the Bason, with all the Sauce in it, upon half a score of us. We now were in a worse Condition than ever, and all got upon our Legs again in the utmost Confusion and Disorder; and with rumbling and tumbling about, a huge Pewter Piss-pot, with about half a dozen Gallons of Urine in it, was thrown down from its Stand. I got a Pocket full to my share, and there were few of the Company but what had their Dividends of it. Bless me, says I, sure never such a Series and Train of Disasters fell out so before. In short, I could stand it no longer, but paid my Shot, and came away with my Clothes in such a condition, that I had scarce ever seen the like, and was forc'd to give them away the next Morning....