The Triads of Ireland 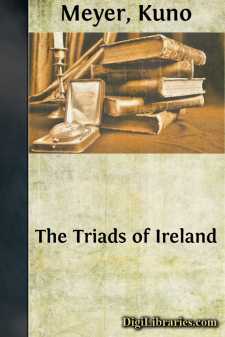 The collection of Irish Triads, which is here edited and translated for the first time, has come down to us in the following nine manuscripts, dating from the fourteenth to the nineteenth century:—

B, i.e. the Book of Ballymote, a vellum of the end of the fourteenth century, pp. 65b-66b (ends imperfectly).

By an oversight I have referred to this ms. sometimes by Lec and sometimes by H. In some cases both Lec and H will be found quoted in the variants. The same ms. is always meant.

These manuscripts have, on the whole, an identical text, though they all occasionally omit a triad or two; and the order of the single triads varies in all of them. They have all been used in constructing a critical text, the most important variants being given in the foot-notes. The order followed is in the main that of the Yellow Book of Lecan.

There are at least three other manuscripts containing copies of the Triads. One of them I discovered in the Stowe collection after the text had been printed off. It is a paper quarto now marked 23. N. 27, containing on fo. 1a-7b a copy of the Triads, followed on fo. 7b-19a by a glossed copy of the Tecosca Cormaic. It was written in 1714 by Domnall (or Daniel) O Duind mac Eimuinn. Its readings agree closely with those of N. In § 237, it alone, of all manuscripts, gives an intelligible reading of a corrupt passage. For cia fochertar im-muir, cia berthair hi tech fo glass dodeime a tiprait oca mbÃ­, it reads: cia focearta im-muir, cia beirthear hi tech fo glass no do theine, dogeibther occan tiprait, 'though it be thrown into the sea, though it be put into a house under lock, or into fire, it will be found at the well.' In § 121 for cerdai it reads cerd; in § 139 it has rotioc and rotocht; in § 143 for grúss its reading is grÃ­s; in §153 it has aibeuloit for eplet; in § 217 tar a n-éisi for dia n-éisi; in § 218 lomradh(twice) for lobra and indlighidh for i n-indligud; in § 219 it has the correct reading éiric, and for dithechte it reads ditheacht; in § 220 it reads fri aroile for fria céile; in § 223 after ile it adds imchiana; in § 224 it reads grÃ­s brond .i. galar; in § 229 for meraichne it has mearaigheacht; in § 235 it has mhamus for mám; in § 236 Maig Hi for Maig Lii; and for co ndeirgenai in dam de it reads co nderna in dam fria.

Another copy, written in 1836 by Peter O'Longan, formerly in the possession of the Earls of Crawford, now belongs to the Rylands Library, Manchester, where it was found by Professor Strachan, who kindly copied a page or two for me....