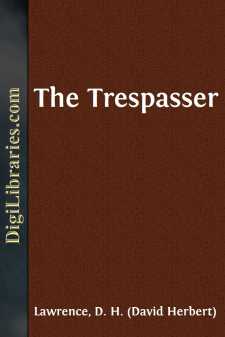 'Take off that mute, do!' cried Louisa, snatching her fingers from the piano keys, and turning abruptly to the violinist.

Helena looked slowly from her music.

'My dear Louisa,' she replied, 'it would be simply unendurable.' She stood tapping her white skirt with her bow in a kind of a pathetic forbearance.

'But I can't understand it,' cried Louisa, bouncing on her chair with the exaggeration of one who is indignant with a beloved. 'It is only lately you would even submit to muting your violin. At one time you would have refused flatly, and no doubt about it.'

'I have only lately submitted to many things,' replied Helena, who seemed weary and stupefied, but still sententious. Louisa drooped from her bristling defiance.

'At any rate,' she said, scolding in tones too naked with love, I don't like it.'

'Go on from Allegro,' said Helena, pointing with her bow to the place on Louisa's score of the Mozart sonata. Louisa obediently took the chords, and the music continued.

A young man, reclining in one of the wicker arm-chairs by the fire, turned luxuriously from the girls to watch the flames poise and dance with the music. He was evidently at his ease, yet he seemed a stranger in the room.

It was the sitting-room of a mean house standing in line with hundreds of others of the same kind, along a wide road in South London. Now and again the trams hummed by, but the room was foreign to the trams and to the sound of the London traffic. It was Helena's room, for which she was responsible. The walls were of the dead-green colour of August foliage; the green carpet, with its border of polished floor, lay like a square of grass in a setting of black loam. Ceiling and frieze and fireplace were smooth white. There was no other colouring.

The furniture, excepting the piano, had a transitory look; two light wicker arm-chairs by the fire, the two frail stands of dark, polished wood, the couple of flimsy chairs, and the case of books in the recess—all seemed uneasy, as if they might be tossed out to leave the room clear, with its green floor and walls, and its white rim of skirting-board, serene.

On the mantlepiece were white lustres, and a small soapstone Buddha from China, grey, impassive, locked in his renunciation. Besides these, two tablets of translucent stone beautifully clouded with rose and blood, and carved with Chinese symbols; then a litter of mementoes, rock-crystals, and shells and scraps of seaweed.

A stranger, entering, felt at a loss. He looked at the bare wall-spaces of dark green, at the scanty furniture, and was assured of his unwelcome. The only objects of sympathy in the room were the white lamp that glowed on a stand near the wall, and the large, beautiful fern, with narrow fronds, which ruffled its cloud of green within the gloom of the window-bay. These only, with the fire, seemed friendly.

The three candles on the dark piano burned softly, the music fluttered on, but, like numbed butterflies, stupidly. Helena played mechanically. She broke the music beneath her bow, so that it came lifeless, very hurting to hear....