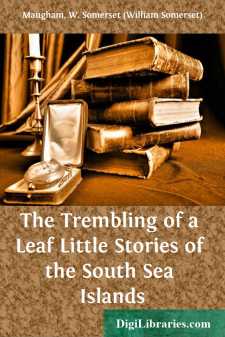 THE Pacific is inconstant and uncertain like the soul of man. Sometimes it is grey like the English Channel off Beachy Head, with a heavy swell, and sometimes it is rough, capped with white crests, and boisterous. It is not so often that it is calm and blue. Then, indeed, the blue is arrogant. The sun shines fiercely from an unclouded sky. The trade wind gets into your blood and you are filled with an impatience for the unknown. The billows, magnificently rolling, stretch widely on all sides of you, and you forget your vanished youth, with its memories, cruel and sweet, in a restless, intolerable desire for life. On such a sea as this Ulysses sailed when he sought the Happy Isles. But there are days also when the Pacific is like a lake. The sea is flat and shining. The flying fish, a gleam of shadow on the brightness of a mirror, make little fountains of sparkling drops when they dip. There are fleecy clouds on the horizon, and at sunset they take strange shapes so that it is impossible not to believe that you see a range of lofty mountains. They are the mountains of the country of your dreams. You sail through an unimaginable silence upon a magic sea. Now and then a few gulls suggest that land is not far off, a forgotten island hidden in a wilderness of waters; but the gulls, the melancholy gulls, are the only sign you have of it. You see never a tramp, with its friendly smoke, no stately bark or trim schooner, not a fishing boat even: it is an empty desert; and presently the emptiness fills you with a vague foreboding.

HE splashed about for a few minutes in the sea; it was too shallow to swim in and for fear of sharks he could not go out of his depth; then he got out and went into the bath-house for a shower. The coldness of the fresh water was grateful after the heavy stickiness of the salt Pacific, so warm, though it was only just after seven, that to bathe in it did not brace you but rather increased your languor; and when he had dried himself, slipping into a bath-gown, he called out to the Chinese cook that he would be ready for breakfast in five minutes. He walked barefoot across the patch of coarse grass which Walker, the administrator, proudly thought was a lawn, to his own quarters and dressed. This did not take long, for he put on nothing but a shirt and a pair of duck trousers and then went over to his chief's house on the other side of the compound. The two men had their meals together, but the Chinese cook told him that Walker had set out on horseback at five and would not be back for another hour.

Mackintosh had slept badly and he looked with distaste at the paw-paw and the eggs and bacon which were set before him. The mosquitoes had been maddening that night; they flew about the net under which he slept in such numbers that their humming, pitiless and menacing, had the effect of a note, infinitely drawn out, played on a distant organ, and whenever he dozed off he awoke with a start in the belief that one had found its way inside his curtains. It was so hot that he lay naked. He turned from side to side. And gradually the dull roar of the breakers on the reef, so unceasing and so regular that generally you did not hear it, grew distinct on his consciousness, its rhythm hammered on his tired nerves and he held himself with clenched hands in the effort to bear it. The thought that nothing could stop that sound, for it would continue to all eternity, was almost impossible to bear, and, as though his strength were a match for the ruthless forces of nature, he had an insane impulse to do some violent thing. He felt he must cling to his self-control or he would go mad. And now, looking out of the window at the lagoon and the strip of foam which marked the reef, he shuddered with hatred of the brilliant scene. The cloudless sky was like an inverted bowl that hemmed it in. He lit his pipe and turned over the pile of Auckland papers that had come over from Apia a few days before. The newest of them was three weeks old. They gave an impression of incredible dullness.

Then he went into the office. It was a large, bare room with two desks in it and a bench along one side. A number of natives were seated on this, and a couple of women. They gossiped while they waited for the administrator, and when Mackintosh came in they greeted him.

He returned their greeting and sat down at his desk. He began to write, working on a report which the governor of Samoa had been clamouring for and which Walker, with his usual dilatoriness, had neglected to prepare....