The Trees of Pride 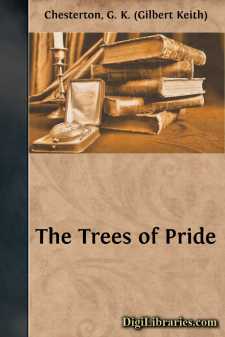 I. THE TALE OF THE PEACOCK TREES

Squire Vane was an elderly schoolboy of English education and Irish extraction. His English education, at one of the great public schools, had preserved his intellect perfectly and permanently at the stage of boyhood. But his Irish extraction subconsciously upset in him the proper solemnity of an old boy, and sometimes gave him back the brighter outlook of a naughty boy. He had a bodily impatience which played tricks upon him almost against his will, and had already rendered him rather too radiant a failure in civil and diplomatic service. Thus it is true that compromise is the key of British policy, especially as effecting an impartiality among the religions of India; but Vane's attempt to meet the Moslem halfway by kicking off one boot at the gates of the mosque, was felt not so much to indicate true impartiality as something that could only be called an aggressive indifference. Again, it is true that an English aristocrat can hardly enter fully into the feelings of either party in a quarrel between a Russian Jew and an Orthodox procession carrying relics; but Vane's idea that the procession might carry the Jew as well, himself a venerable and historic relic, was misunderstood on both sides. In short, he was a man who particularly prided himself on having no nonsense about him; with the result that he was always doing nonsensical things. He seemed to be standing on his head merely to prove that he was hard-headed.

He had just finished a hearty breakfast, in the society of his daughter, at a table under a tree in his garden by the Cornish coast. For, having a glorious circulation, he insisted on as many outdoor meals as possible, though spring had barely touched the woods and warmed the seas round that southern extremity of England. His daughter Barbara, a good-looking girl with heavy red hair and a face as grave as one of the garden statues, still sat almost motionless as a statue when her father rose. A fine tall figure in light clothes, with his white hair and mustache flying backwards rather fiercely from a face that was good-humored enough, for he carried his very wide Panama hat in his hand, he strode across the terraced garden, down some stone steps flanked with old ornamental urns to a more woodland path fringed with little trees, and so down a zigzag road which descended the craggy Cliff to the shore, where he was to meet a guest arriving by boat. A yacht was already in the blue bay, and he could see a boat pulling toward the little paved pier.

And yet in that short walk between the green turf and the yellow sands he was destined to find, his hard-headedness provoked into a not unfamiliar phase which the world was inclined to call hot-headedness. The fact was that the Cornish peasantry, who composed his tenantry and domestic establishment, were far from being people with no nonsense about them. There was, alas! a great deal of nonsense about them; with ghosts, witches, and traditions as old as Merlin, they seemed to surround him with a fairy ring of nonsense....