The Treasure of Heaven A Romance of Riches 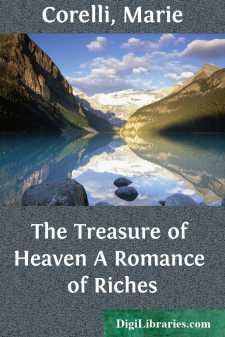 London,—and a night in June. London, swart and grim, semi-shrouded in a warm close mist of mingled human breath and acrid vapour steaming up from the clammy crowded streets,—London, with a million twinkling lights gleaming sharp upon its native blackness, and looking, to a dreamer's eye, like some gigantic Fortress, built line upon line and tower upon tower,—with huge ramparts raised about it frowningly as though in self-defence against Heaven. Around and above it the deep sky swept in a ring of sable blue, wherein thousands of stars were visible, encamped after the fashion of a mighty army, with sentinel planets taking their turns of duty in the watching of a rebellious world. A sulphureous wave of heat half asphyxiated the swarms of people who were hurrying to and fro in that restless undetermined way which is such a predominating feature of what is called a London "season," and the general impression of the weather was, to one and all, conveyed in a sense of discomfort and oppression, with a vague struggling expectancy of approaching thunder. Few raised their eyes beyond the thick warm haze which hung low on the sooty chimney-pots, and trailed sleepily along in the arid, dusty parks. Those who by chance looked higher, saw that the skies above the city were divinely calm and clear, and that not a cloud betokened so much as the shadow of a storm.

The deep bell of Westminster chimed midnight, that hour of picturesque ghostly tradition, when simple village maids shudder at the thought of traversing a dark lane or passing a churchyard, and when country folks of old-fashioned habits and principles are respectably in bed and for the most part sleeping. But so far as the fashionable "West End" was concerned, it might have been midday. Everybody assuming to be Anybody, was in town. The rumble of carriages passing to and fro was incessant,—the swift whirr and warning hoot of coming and going motor vehicles, the hoarse cries of the newsboys, and the general insect-like drone and murmur of feverish human activity were as loud as at any busy time of the morning or the afternoon. There had been a Court at Buckingham Palace,—and a "special" performance at the Opera,—and on account of these two functions, entertainments were going on at almost every fashionable house in every fashionable quarter. The public restaurants were crammed with luxury-loving men and women,—men and women to whom the mere suggestion of a quiet dinner in their own homes would have acted as a menace of infinite boredom,—and these gilded and refined eating-houses were now beginning to shoot forth their bundles of well-dressed, well-fed folk into the many and various conveyances waiting to receive them. There was a good deal of needless shouting, and much banter between drivers and policemen. Now and again the melancholy whine of a beggar's plea struck a discordant note through the smooth-toned compliments and farewells of hosts and their departing guests. No hint of pause or repose was offered in the ever-changing scene of uneasy and impetuous excitation of movement, save where, far up in the clear depths of space, the glittering star-battalions of a wronged and forgotten God held their steadfast watch and kept their hourly chronicle. London with its brilliant "season" seemed the only living fact worth recognising; London, with its flaring noisy streets, and its hot summer haze interposed like a grey veil between itself and the higher vision. Enough for most people it was to see the veil,—beyond it the view is always too vast and illimitable for the little vanities of ordinary mortal minds.

Amid all the din and turmoil of fashion and folly seeking its own in the great English capital at the midnight hour, a certain corner of an exclusively fashionable quarter seemed strangely quiet and sequestered, and this was the back of one of the row of palace-like dwellings known as Carlton House Terrace. Occasionally a silent-wheeled hansom, brougham, or flashing motor-car sped swiftly along the Mall, towards which the wide stone balcony of the house projected,—or the heavy footsteps of a policeman walking on his beat crunched the gravel of the path beneath, but the general atmosphere of the place was expressive of solitude and even of gloom. The imposing evidences of great wealth, written in bold headlines on the massive square architecture of the whole block of huge mansions, only intensified the austere sombreness of their appearance, and the fringe of sad-looking trees edging the road below sent a faint waving shadow in the lamplight against the cold walls, as though some shuddering consciousness of happier woodland scenes had suddenly moved them to a vain regret. The haze of heat lay very thickly here, creeping along with slow stealth like a sluggish stream, and a suffocating odour suggestive of some subtle anæsthetic weighed the air with a sense of nausea and depression....