by James B. (James Brendan) Connolly 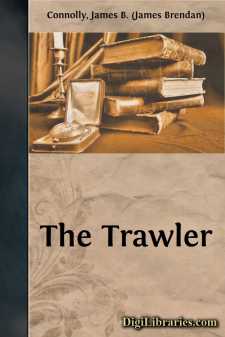 To John Snow's home in Gloucester came the tale this night of how Arthur Snow was washed from the deck of Hugh Glynn's vessel and lost at sea; and it was Saul Haverick, his sea clothes still on him, who brought the word.

"I'm telling you, John Snow," said Saul—and he out of breath almost with the telling—"and others than me will by an' by be telling you, what a black night it was, with a high-running sea and wind to blow the last coat o' paint off the vessel, but o' course he had to be the first o' the fleet—nothing less would do him—to make the market with his big ketch. It was for others, not for him, to show the way to take in sail, he said, and not a full hour before it happened that was." Such was Saul Haverick's ending.

John Snow said nothing; Mrs. Snow said nothing. Saul looked to me, but I gave no sign that I had heard him. Only John Snow's niece, Mary, looking up from her hands folded in her lap, said: "Surely you must find it painful, Saul Haverick, to ship with such a wicked man and take the big shares of money that fall to his crew?"

"Eh!" said Saul, frightened-like at her. "I'm not denying that he is a great fish killer, Mary Snow, and that we haven't shared some big trips with him; but it is like his religion, I'm telling you, to be able to say how he allowed no man ever he crossed tacks with to work to wind'ard of him. He's that vain he'd drive vessel, himself, and all hands to the bottom afore he'd let some folks think anything else of him."

"He lost my boy—we'll say no more of him," said John Snow.

"Ay," said Saul Haverick, "we'll speak no more of him. But I was Arthur's dory mate, John Snow, as you well know, and my heart is sick to think of it. I'll be going now," and go he did, softly and by way of the back stairs; and he no more than gone when a knock came to the door.

After a time, the clock on the mantel ticking loud among us, John Snow called out: "Come in!"

I remember how Hugh Glynn stepped within the door of John Snow's kitchen that night, and how he bent his head to step within; and, bending his head, took off his cap; and how he bowed to John Snow, Mrs. Snow, and Mary Snow in turn, and, facing John Snow, made as if to speak; but how his voice would not come, not until he had lifted his head yet higher and cleared his throat. And beginning again, he took a step nearer the middle of the floor, to where the light of the bracket lamp above the kitchen table shone full on his face. He was a grand man to look at, not only his face but the height and build of him, and he was fresh in from sea.

"John Snow—and you, Mrs. Snow—the Arbiter's to anchor in the stream, and her flag's to half-mast. And knowing that, maybe there's no need to say anything more."

Hugh Glynn went on. "Well, he was a good boy, your Arthur—maybe you'd like to be told that, even by me, though of course you that was his father, John Snow, and you that was his mother, Mrs. Snow, know better than anybody else what he was. Three nights ago it was, and we to the south'ard of Sable Island in as nasty a breeze as I'd been in for some time....