The Training of a Public Speaker 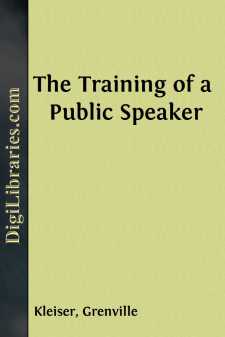 RHETORIC AND ELOQUENCE WHAT RHETORIC IS

Rhetoric has been commonly defined as "The power of persuading." This opinion originated with Isocrates, if the work ascribed to him be really his; not that he intended to dishonor his profession, tho he gives us a generous idea of rhetoric by calling it the workmanship of persuasion. We find almost the same thing in the Gorgias of Plato, but this is the opinion of that rhetorician, and not of Plato. Cicero has written in many places that the duty of an orator is to speak in "a manner proper to persuade"; and in his books of rhetoric, of which undoubtedly he does not approve himself, he makes the end of eloquence to consist in persuasion.

But does not money likewise persuade? Is not credit, the authority of the speaker, the dignity of a respectable person, attended with the same effect? Even without speaking a word, the remembrance of past services, the appearance of distress, a beautiful aspect, make deep impressions on minds and are decisive in their favor.

Did Antonius, pleading the cause of M. Aquilius, trust to the force of his reasons when he abruptly tore open his garment and exposed to view the honorable wounds he received fighting for his country? This act of his forced streams of tears from the eyes of the Roman people, who, not able to resist so moving a spectacle, acquitted the criminal. Sergius Galba escaped the severity of the laws by appearing in court with his own little children, and the son of Gallus Sulpitius, in his arms. The sight of so many wretched objects melted the judges into compassion. This we find equally attested by some of our historians and by a speech of Cato. What shall I say of the example of Phryne, whose beauty was of more service in her cause than all the eloquence of Hyperides; for tho his pleading was admirable in her defense, yet perceiving it to be without effect, by suddenly laying open her tunic he disclosed the naked beauty of her bosom, and made the judges sensible that she had as many charms for them as for others. Now, if all these instances persuade, persuasion, then, can not be the end of rhetoric.

Some, therefore, have seemed to themselves rather more exact who, in the main of the same way of thinking, define rhetoric as the "Power of persuading by speaking." It is to this that Gorgias, in the book above cited, is at last reduced by Socrates. Theodectes does not much differ from them, if the work ascribed to him be his, or Aristotle's. In this book the end of rhetoric is supposed to be "The leading of men wherever one pleases by the faculty of speaking." But this definition is not sufficiently comprehensive. Many others besides the orator persuade by their words and lead minds in whatever direction they please.

Some, therefore, as Aristotle, setting aside the consideration of the end, have defined rhetoric to be "The power of inventing whatever is persuasive in a discourse." This definition is equally as faulty as that just mentioned, and is likewise defective in another respect, as including only invention, which, separate from elocution, can not constitute a speech.

It appears from Plato's Gorgias that he was far from regarding rhetoric as an art of ill tendency, but that, rather it is, or ought to be, if we were to conceive an adequate idea of it inseparable from virtue. This he explains more clearly in his Phædrus, where he says that "The art can never be perfect without an exact knowledge and strict observance of justice." I join him in this opinion, and if these were not his real sentiments, would he have written an apology for Socrates and the eulogium of those brave citizens who lost their lives in the defense of their country?...