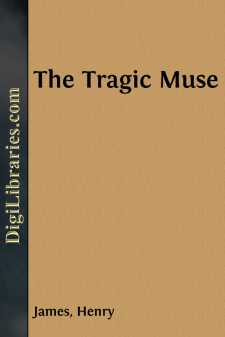 I profess a certain vagueness of remembrance in respect to the origin and growth of The Tragic Muse, which appeared in the Atlantic Monthly again, beginning January 1889 and running on, inordinately, several months beyond its proper twelve. If it be ever of interest and profit to put one's finger on the productive germ of a work of art, and if in fact a lucid account of any such work involves that prime identification, I can but look on the present fiction as a poor fatherless and motherless, a sort of unregistered and unacknowledged birth. I fail to recover my precious first moment of consciousness of the idea to which it was to give form; to recognise in it—as I like to do in general—the effect of some particular sharp impression or concussion. I call such remembered glimmers always precious, because without them comes no clear vision of what one may have intended, and without that vision no straight measure of what one may have succeeded in doing. What I make out from furthest back is that I must have had from still further back, must in fact practically have always had, the happy thought of some dramatic picture of the "artist-life" and of the difficult terms on which it is at the best secured and enjoyed, the general question of its having to be not altogether easily paid for. To "do something about art"—art, that is, as a human complication and a social stumbling-block—must have been for me early a good deal of a nursed intention, the conflict between art and "the world" striking me thus betimes as one of the half-dozen great primary motives. I remember even having taken for granted with this fond inveteracy that no one of these pregnant themes was likely to prove under the test more full of matter. This being the case, meanwhile, what would all experience have done but enrich one's conviction?—since if, on the one hand, I had gained a more and more intimate view of the nature of art and the conditions therewith imposed, so the world was a conception that clearly required, and that would for ever continue to take, any amount of filling-in. The happy and fruitful truth, at all events, was that there was opposition—why there should be was another matter—and that the opposition would beget an infinity of situations. What had doubtless occurred in fact, moreover, was that just this question of the essence and the reasons of the opposition had shown itself to demand the light of experience; so that to the growth of experience, truly, the treatment of the subject had yielded. It had waited for that advantage.

Yet I continue to see experience giving me its jog mainly in the form of an invitation from the gentle editor of the Atlantic, the late Thomas Bailey Aldrich, to contribute to his pages a serial that should run through the year. That friendly appeal becomes thus the most definite statement I can make of the "genesis" of the book; though from the moment of its reaching me everything else in the matter seems to live again. What lives not least, to be quite candid, is the fact that I was to see this production make a virtual end, for the time, as by its sinister effect—though for reasons still obscure to me—of the pleasant old custom of the "running" of the novel. Not for many years was I to feel the practice, for my benefit, confidingly revive. The influence of The Tragic Muse was thus exactly other than what I had all earnestly (if of course privately enough) invoked for it, and I remember well the particular chill, at last, of the sense of my having launched it in a great grey void from which no echo or message whatever would come back. None, in the event, ever came, and as I now read the book over I find the circumstance make, in its name, for a special tenderness of charity; even for that finer consideration hanging in the parental breast about the maimed or slighted, the disfigured or defeated, the unlucky or unlikely child—with this hapless small mortal thought of further as somehow "compromising." I am thus able to take the thing as having quite wittingly and undisturbedly existed for itself alone, and to liken it to some aromatic bag of gathered herbs of which the string has never been loosed; or, better still, to some jar of potpourri, shaped and overfigured and polished, but of which the lid, never lifted, has provided for the intense accumulation of the fragrance within. The consistent, the sustained, preserved tone of The Tragic Muse, its constant and doubtless rather fine-drawn truth to its particular sought pitch and accent, are, critically speaking, its principal merit—the inner harmony that I perhaps presumptuously permit myself to compare to an unevaporated scent.

After which indeed I may well be summoned to say what I mean, in such a business, by an appreciable "tone" and how I can justify my claim to it—a demonstration that will await us later. Suffice it just here that I find the latent historic clue in my hand again with the easy recall of my prompt grasp of such a chance to make a story about art. There was my subject this time—all mature with having long waited, and with the blest dignity that my original perception of its value was quite lost in the mists of youth. I must long have carried in my head the notion of a young man who should amid difficulty—the difficulties being the story—have abandoned "public life" for the zealous pursuit of some supposedly minor craft; just as, evidently, there had hovered before me some possible picture (but all comic and ironic) of one of the most salient London "social" passions, the unappeasable curiosity for the things of the theatre; for every one of them, that is, except the drama itself, and for the "personality" of the performer (almost any performer quite sufficiently serving) in particular....