The Tragedy Of Caesar's Revenge 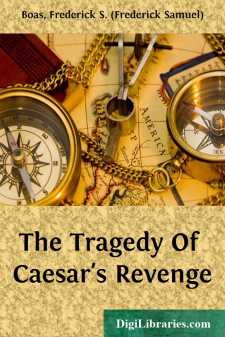 Plays on the subject of Caius Julius are so numerous that some difficulty arises in properly distinguishing the titles. In the case of the piece here reprinted the first title, which is also the head title, suggests a play of Chapman’s, while the running title is the traditional property of William Shakespeare. It seems, therefore, best that it should become known by the name which appears second on the title-page. And, indeed, there is reason to suppose that it was this title that the piece originally bore, for the entry in the Registers of the Stationers’ Company runs as follows:

John Wright and Nathanael ffossbrook Entred for their Copies vnder the handes of Master Doctor Couell and the wardens A booke called Iulius Caesars reuenge. vjd

The edition that followed upon this entry was undated, but probably appeared before the end of the year. It bore Wright’s name and address as stationer, and the initials and device of George Eld as printer. It was a quarto printed in roman type of a body similar to modern pica (20 ll. = 83 mm.). Of this original issue copies survive in the Dyce Library at South Kensington and in the collection of the Duke of Devonshire. In other copies the original title-leaf has been cancelled and replaced by a reprint. This, which is dated 1607, bears the names of both stationers, and a different address, which is presumably Fosbrook’s. The printer’s initials have been omitted, and, more important, his device has made way for the note ‘Priuately acted by the Studentes of Trinity Colledge in Oxford’. The original type had already been distributed, and not only the title, but also the list of personae on the verso of the leaf, was reset.   Why Fosbrook should have been originally forgotten, as it would seem he was, and his portion of the stock provided with a title-page which is evidently of the nature of an afterthought, there is nothing to show. Copies of this second issue are in the Bodleian Library at Oxford and the British Museum. All the copies mentioned are perfect, and for the purpose of the present reprint those in the British Museum, Bodleian and Dyce libraries have been collated throughout. The two former are in substantial agreement: the Dyce copy has both formes of sheet A in an uncorrected state: there is a curious progressive error at l. .

No record of performance survives to corroborate the information supplied by the second title-page, but from internal evidence it may be supposed to have taken place some years before publication, the style of the play being modelled on those popular in the last decade of the sixteenth century, especially Tamburlaine and the Spanish Tragedie. The complete absence of comic relief, and the exceptional number of recondite classical allusions, are in favour of the academic origin of the play, and this is perhaps further evidenced by the fact that the source, upon which the anonymous author drew, appears to have been, not Plutarch, but Appian’s Bellum Civile. Appian alone (book II, chapters 113 and 117) names Bucolianus among Caesar’s murderers, though Cicero mentions him twice in his letters to Atticus as Bucilianus. There is also one local reference to connect the play with Oxford, in the lines put into Caesar’s mouth.

The text of the play presents a good many difficulties, and in some places there is reason to suspect more or less serious lacunae. The classical names too are often badly corrupted, and the punctuation is the worst conceivable. There is a division into acts and scenes, but it neither follows a consistent principle, nor exhibits a correct numbering. A new division on the ordinarily accepted principles of the English stage has therefore been introduced in the margin. This has necessitated a somewhat minute consideration of exits and entrances, and a special list of necessary stage directions has been added below after the usual .

A list of personae is given in the original on the verso of the title-leaf. The only omission is that of a Lord who has a part in several scenes.

The thanks of the editor are due to the Rev. H. E. D. Blakiston, President of Trinity College, Oxford, for information to the effect that no references to plays are traceable in the account books of the College, unless a payment of 6s. 6d. for a ‘spectaculum in festo Trinitatis’ in 1565 can be so interpreted. A similar debt is owing to Mr. J. P. Maine, librarian to the Duke of Devonshire, for information as to the readings of the copy of the original issue of the play preserved at Chatsworth.

The punctuation of the original is so erratic as to make it impossible to record all irregularities....