The Tragedies of Euripides, Volume I. 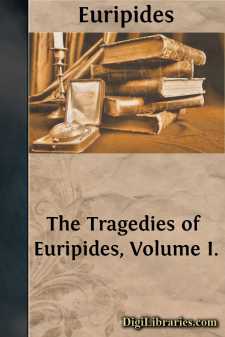 Euripides, son of Mnesarchus, was born in the island of Salamis, on the day of the celebrated victory (B.C. 480). His mother, Clito, had been sent thither in company with the other Athenian women, when Attica was given up, and the ships became at once the refuge of the male population, and the national defense. Mr. Donaldson well remarks, that the patronymic form of his name, derived from the Euripus, which was the scene of the first successful resistance offered to the Persian navy, shows that the attention of his parents was fully excited by the stirring events of the time.

Notwithstanding the fact that his mother had been an herb-seller, it is probable that his father was a man of some family. That he was at least possessed of ample means, is evident from the care and expense bestowed upon our poet's education. Under the tutorship of Anaxagoras, Prodicus, and Protagoras, he had studied both natural philosophy and rhetoric in its sophistical form. In gymnastic exercises he exhibited a successful prowess, being twice victorious in the Eleusinian and Thesean games. Of his skill in painting, some specimens were preserved at Megara.

His appearance as a dramatist was at an earlier age than that of his predecessors, as he was only five and twenty years old when he produced the "Peliades," his first tragedy. On this occasion, he gained the third prize in the tragic contests, but the first, fourteen years after, and subsequently, with the "Hippolytus," in 428 B.C. The peculiar tendency of some of the ideas expressed in his plays, was the probable cause of the retirement of Euripides to Macedonia, where he obtained the friendship of King Archelaus. Perhaps, however, the unhappiness of his connubial state, arising from the infidelity of his two wives, might have rendered Athens a disagreeable place of abode for the woman-hating poet, especially when his "domestic bliss" was continually seasoned by the sarcastic jokes and allusions of his political enemy, Aristophanes. Moreover, his acquaintance with the talking philosopher, Socrates, must have been unfavorable to the continuance of his popularity.

The fate of Pentheus in our author's noble play, the "Bacchæ," appears to have given origin to the tradition that he himself was torn to pieces by dogs. If we reflect that this play was probably the last of his works, the mistake seems a plausible one. The death of Euripides, which probably happened in the ordinary course of nature, has, like that of Æschylus, been associated with the marvelous.

The Athenians vainly craved the honor of giving a resting-place to the ashes of their philosopher-poet. He was buried at Pella, but a cenotaph at Athens showed that his countrymen had not forgotten Euripides. His death took place B.C. 406.

The inferiority of our author to the greater tragedians, prevents our feeling much desire to enter upon the respective merits and demerits of his several plays, especially as we are completely anticipated by Schlegel, with whose masterly analysis every reader ought to be acquainted....