The Tower of Oblivion 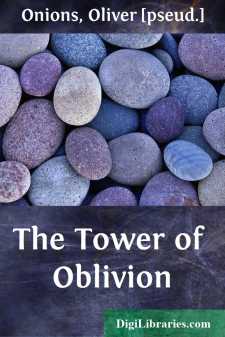 THE TOWER OF OBLIVION I

I think it is Edgar Allan Poe who says that while a plain thing may on occasion be told with a certain amount of elaboration of style, one that is unusual in its very nature is best related in the simplest terms possible. I shall adopt the second of these methods in telling this story of my friend, Derwent Rose. And I will begin straight away with that afternoon of the spring of last year when, with my own eyes, I first saw, or fancied I saw, the beginning of the change in him.

The Lyonnesse Club meets in an electric-lighted basement-suite a little way off the Strand, and as I descended the stairs I saw him in the narrow passage. He was standing almost immediately under an incandescent lamp that projected on its curved petiole from the wall. The light shone brilliantly on his hair, where hardly a hint of grey or trace of thinness yet showed, and his handsome brow and straight nose were in full illumination and the rest of his face in sharp shadow. He wore a dark blue suit with an exquisitely pinned soft white silk collar, to which, as I watched, his fingers moved once; and he was examining with deep attention a print that hung on the buff-washed wall.

I spoke behind him. "Hello, Derry! One doesn't often see your face here."

Quietly as I spoke, he started. Ordinarily he had very straight and steady grey-blue eyes, alert and receptive, but for some seconds they looked from me to the print and from the print to me, irresolutely and with equally divided attention. One would almost have thought that he had heard his name called from a great distance. Then his eyes settled finally on the print, and he repeated my last words over his shoulder.

"What's the picture? Anything special?"

Still without moving his eyes from it he replied, "The picture? You ought to know more about it than I—it's your Club, not mine——"

And he continued his absorbed scrutiny.

Now I had passed that picture scores of times before and had never found it worth a glance. It was a common collotype reproduction of a stodgy night-effect, a full moon in a black-leaded sky with reflections in water to match—price perhaps five shillings. Then suddenly, looking over his shoulder, I realised where his interest in it lay. He was not looking at the picture at all. In the polished glass, that made an excellent mirror in that concentrated light, I had seen his eyes earnestly fixed on his own eyes, his cheeks, his hair, his chin....

Well, Derwent Rose had better reason than most men for looking at himself in a picture-glass if he chose. Indeed it had already struck me that that afternoon he looked even more than ordinarily fresh and handsome. Let me, before we go any further, describe his personal appearance to you.

He had, as I knew, passed his forty-fifth birthday in the preceding January; but he would have been taken anywhere for at least ten years younger. You will believe this when I tell you that at the age of thirty-nine, that is to say in the year 1914, he had walked into a recruiting-office, had given his age as twenty-eight, received the compliments of the R.A.M.C....