The Torch Bearer A Look Forward and Back at the Woman's Journal, the Organ of the Woman's Movement 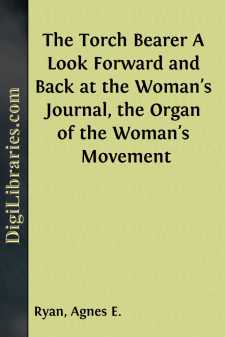 So wonderful are the days in which we are living and so rapidly is the canvas being crowded with the record of achievement in the woman's movement that it is time for readers of the Woman's Journal and for all suffragists to know somewhat intimately and as never before what goes on in the four little rooms in Boston where the organ of the suffrage movement is prepared for its readers each week.

Before telling what has been done and what is planned and hoped, it will perhaps be well to give a little picture of the paper which to many has been the "Suffrage Bible" since it was started over forty-six years ago by Lucy Stone, Henry B. Blackwell and the little band of woman's rights pioneers who saw, almost at the dawn of the movement, the need of an organ.

Before the charter for the Woman's Journal was granted in 1870, $10,000 had to be paid into its treasury. This was at a time when there were few millionaires in the world, and $10,000 then must have looked like as many millions today.

How ardent, then, must have been the few, how eloquent the presentation, to have raised $10,000 with which to start a paper for the sole purpose of advocating equal rights for women! But they were ardent and eloquent, and from the road to martyrdom they have come to us through history as great men and women of their time. The pages of the Woman's Journal are brilliant with their sayings, and the reports of the early stockholders' meetings echo the voices of that pioneer band led by Wendell Phillips, William Lloyd Garrison, Lucy Stone and Julia Ward Howe.

Never for a single week since 1870 have the women of the country been without a mouthpiece to voice their needs and wrongs. This has been due chiefly to the fact that the Stone-Blackwell family has continuously given not only of its services in editing and managing the paper, but also has made generous contributions for years to enable the paper to continue.

With the exception of these $4,000, I have raised or borrowed each year the necessary money, over and above receipts, to keep the paper going. With the beginning of 1915 Miss Blackwell began to feel that she could not continue indefinitely to make up a deficit, and she began seriously to consider cutting the size of the paper to four pages or making it a monthly.

The 1915 campaigns particularly needed all the aid that the Journal could give, and feeling keenly that the proposed changes would greatly reduce its power of usefulness, the following points were made by Mr. Stevens and myself in further consideration of the matter with Miss Blackwell and a few warm friends of the Journal:

With the single exception of the Irish Citizen, the Woman's Journal is the only suffrage paper in existence which has no organization back of it....