The Time of Roses 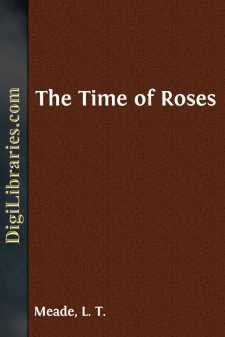 It was on a summer's evening early in the month of August that the little Mummy was once again seen on the platform at Dawlish.

She looked now very much like she did when we saw her of yore—slightly broadened, it is true, by the added years, but she still wore somewhat rusty widow's black, and her face still had that half-anxious, half-comical expression, which made people turn to look at her with something between a smile and a sigh. She was commonplace and plain, and yet in one sense she was neither commonplace nor plain. She had a character, and that character had developed during the last few years, and rather for the better.

There were very few passengers on the platform, and the little woman paced up and down, thinking to herself.

"She is coming home at last. I don't know whether I am glad or sorry. I wonder what sort of girl Miss Sharston is. She has been very kind to Florence; but it was rash of Florence to invite her. Still, I suppose we shall be able to manage all right."

Just then the signal announcing the approaching train was lowered, and a moment or two later the said train drew up at the platform and one or two passengers alighted. Amongst these was a tall, well-set-up, dark-eyed girl, and accompanying her was another girl, who was not so tall and was very slender, with an ethereal sort of face, and large, speaking grey eyes.

The tall girl rushed up to where the little Mummy was standing.

"Here I am, Mummy," she said, "and this is Kitty, and we are both tired and hungry, and glad to see you again. Is there any sort of trap for our luggage, or can the porter take it and shall we walk to the cottage?"

"The cottage is just as small as ever it was, Florence," replied the little Mummy. "Oh, I am so glad to see you, Miss Sharston." Here she shook hands with Kitty Sharston.

"We like things small," said Kitty; "we want to have a real charming time in the country. It is very good of you to consent to take me in, Mrs. Aylmer."

A porter now appeared. Florence bustled off to see to the luggage, and Mrs. Aylmer and Kitty slowly left the station. Florence ran after them in a moment or two.

"Well," she said, "here we are! Both of us have done with school for ever and a day. We are grown-up girls ready to take our place in the world, and to give you a right good time, Mummy; isn't that so, Kitty?"

"Yes," said Kitty, in that gentle voice which always had a pathetic ring in it. Then she added after a moment's pause: "But I don't know that I am glad to have left school; I must confess that I enjoyed the last few years at Cherry Court School immensely."

"Don't talk to me of Cherry Court School," said the widow, with a little shudder.

She glanced round in an inquiring way at Florence, who coloured faintly and then said, in a stout voice: "I have repented of that old sin long ago, and I do not in the least mind having Cherry Court School alluded to. I have had a right good time, and it was a very lucky thing for me I did not win that Scholarship, for if I had I should have been eating the bread of dependence now, whereas—" Here she drew herself up, uttered a quick sigh, and looked ahead of her....