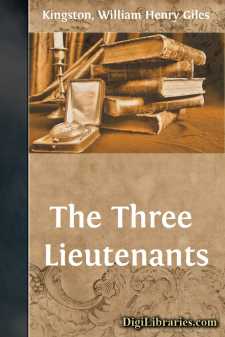 “Really, Jack, that uniform is excessively becoming. Do oblige us by standing up as if you were on the quarter-deck of your ship and hailing the main-top. I do not remember ever having seen a naval officer above the rank of a midshipman in uniform before. Do you, Lucy?”

“Only once, at a Twelfth-night party at Foxica, to which you did not go, when Lady Darlington persuaded Admiral Triton to rig himself out, as he called it, for our amusement, in a naval suit of the time of Benbow, belonging to her great-grandfather. I prefer Jack in his uniform, I own, and he looks infinitely better in it than he does in top-boots and a hunting-coat, when he is eclipsed by many of the young farmers who have not two ideas to string together.”

These remarks were made in the presence of Jack Rogers by his young and pretty sisters, Mary and Lucy, soon after his return home from China, on his promotion to the rank of Lieutenant, when one morning he entered the breakfast-room, dressed in a bran-new uniform, which, with inward satisfaction, he had put on at their request, that he might exhibit it to them. It set off to advantage his manly, well-knit figure, at which no one could look without seeing that he must possess ample strength of limb and muscle. An honest, kind heart beamed through a somewhat broad, very sun-burnt countenance. His features were good, though, and his head was well set on a wide pair of shoulders, which made him look shorter than he really was, not that he could boast of being a man of inches. Take him for all in all, Jack Rogers was a thoroughly good specimen of the British naval officer. Of course his sisters admired him—what sisters would not?—but their admiration was surpassed by that of his youngest brother, Tom, who was firmly of opinion that there never had been and never could be anybody like him; yet Tom was Jack in miniature, and the portrait of Jack, taken just before he went to sea, was frequently supposed to be that of Tom. At school (Tom went to Eagle House, which, though old Rowley had retired to enjoy a well-earned “otium cum dignitate” in his native Cumberland, still kept up its ancient character under an able master) his great delight was to talk of the sayings and doings of “my brother Jack,” and to read extracts from the accounts of the latter, which from time to time came home. Tom’s schoolfellows knew almost as much about Jack’s adventures as those who, in subsequent years, read them in print, and they all agreed that he must be a first-rate chap.

“I should think so, indeed,” said Tom, in a tone of confidence. “If you were just to see him once you’d say I am right, and my great wonder is, that the Lords of the Admiralty don’t make him a post-captain right off at once. They couldn’t help themselves if they knew him as well as I do.”

Thus admiring Jack, it was natural that Tom should have resolved to follow in his footsteps. His whole heart was set upon being a sailor, and going some day to sea with Jack....