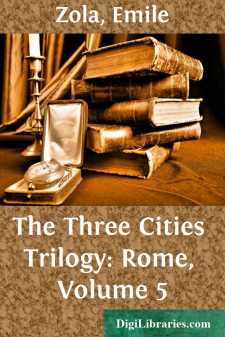 THAT evening, when Pierre emerged from the Borgo in front of the Vatican, a sonorous stroke rang out from the clock amidst the deep silence of the dark and sleepy district. It was only half-past eight, and being in advance the young priest resolved to wait some twenty minutes in order to reach the doors of the papal apartments precisely at nine, the hour fixed for his audience.

This respite brought him some relief amidst the infinite emotion and grief which gripped his heart. That tragic afternoon which he had spent in the chamber of death, where Dario and Benedetta now slept the eternal sleep in one another's arms, had left him very weary. He was haunted by a wild, dolorous vision of the two lovers, and involuntary sighs came from his lips whilst tears continually moistened his eyes. He had been altogether unable to eat that evening. Ah! how he would have liked to hide himself and weep at his ease! His heart melted at each fresh thought. The pitiful death of the lovers intensified the grievous feeling with which his book was instinct, and impelled him to yet greater compassion, a perfect anguish of charity for all who suffered in the world. And he was so distracted by the thought of the many physical and moral sores of Paris and of Rome, where he had beheld so much unjust and abominable suffering, that at each step he took he feared lest he should burst into sobs with arms upstretched towards the blackness of heaven.

In the hope of somewhat calming himself he began to walk slowly across the Piazza of St. Peter's, now all darkness and solitude. On arriving he had fancied that he was losing himself in a murky sea, but by degrees his eyes grew accustomed to the dimness. The vast expanse was only lighted by the four candelabra at the corners of the obelisk and by infrequent lamps skirting the buildings which run on either hand towards the Basilica. Under the colonnade, too, other lamps threw yellow gleams across the forest of pillars, showing up their stone trunks in fantastic fashion; while on the piazza only the pale, ghostly obelisk was at all distinctly visible. Pierre could scarcely perceive the dim, silent facade of St. Peter's; whilst of the dome he merely divined a gigantic, bluey roundness faintly shadowed against the sky. In the obscurity he at first heard the plashing of the fountains without being at all able to see them, but on approaching he at last distinguished the slender phantoms of the ever rising jets which fell again in spray. And above the vast square stretched the vast and moonless sky of a deep velvety blue, where the stars were large and radiant like carbuncles; Charles's Wain, with golden wheels and golden shaft tilted back as it were, over the roof of the Vatican, and Orion, bedizened with the three bright stars of his belt, showing magnificently above Rome, in the direction of the Via Giulia.

At last Pierre raised his eyes to the Vatican, but facing the piazza there was here merely a confused jumble of walls, amidst which only two gleams of light appeared on the floor of the papal apartments....