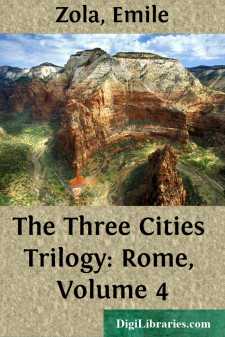 IN his anxiety to bring things to a finish, Pierre wished to begin his campaign on the very next day. But on whom should he first call if he were to steer clear of blunders in that intricate and conceited ecclesiastical world? The question greatly perplexed him; however, on opening his door that morning he luckily perceived Don Vigilio in the passage, and with a sudden inspiration asked him to step inside. He realised that this thin little man with the saffron face, who always trembled with fever and displayed such exaggerated, timorous discretion, was in reality well informed, mixed up in everything. At one period it had seemed to Pierre that the secretary purposely avoided him, doubtless for fear of compromising himself; but recently Don Vigilio had proved less unsociable, as though he were not far from sharing the impatience which must be consuming the young Frenchman amidst his long enforced inactivity. And so, on this occasion, he did not seek to avoid the chat on which Pierre was bent.

"I must apologise," said the latter, "for asking you in here when things are in such disorder. But I have just received some more linen and some winter clothing from Paris. I came, you know, with just a little valise, meaning to stay for a fortnight, and yet I've now been here for nearly three months, and am no more advanced than I was on the morning of my arrival."

Thereupon Pierre explained to him that Monsignor Nani had informed him, through the Contessina, that he now ought to act and see everybody for the defence of his book. But he was much embarrassed, as he did not know in what order to make his visits so that they might benefit him. For instance, ought he to call in the first place on Monsignor Fornaro, the /consultore/ selected to report on his book, and whose name had been given him?

"Ah!" exclaimed Don Vigilio, quivering; "has Monsignor Nani gone as far as that—given you the reporter's name? That's even more than I expected." Then, forgetting his prudence, yielding to his secret interest in the affair, he resumed: "No, no; don't begin with Monsignor Fornaro. Your first visit should be a very humble one to the Prefect of the Congregation of the Index—his Eminence Cardinal Sanguinetti; for he would never forgive you for having offered your first homage to another should he some day hear of it." And, after a pause, Don Vigilio added, in a low voice, amidst a faint, feverish shiver: "And he /would/ hear of it; everything becomes known."

Again he hesitated, and then, as if yielding to sudden, sympathetic courage, he took hold of the young Frenchman's hands. "I swear to you, my dear Monsieur Froment," he said, "that I should be very happy to help you, for you are a man of simple soul, and I really begin to feel worried for you. But you must not ask me for impossibilities. Ah! if you only knew—if I could only tell you of all the perils which surround us! However, I think I can repeat to you that you must in no wise rely on my patron, his Eminence Cardinal Boccanera....