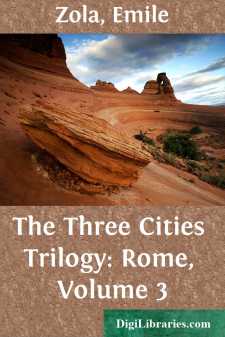 On the following day as Pierre, after a long ramble, once more found himself in front of the Vatican, whither a harassing attraction ever led him, he again encountered Monsignor Nani. It was a Wednesday evening, and the Assessor of the Holy Office had just come from his weekly audience with the Pope, whom he had acquainted with the proceedings of the Congregation at its meeting that morning. "What a fortunate chance, my dear sir," said he; "I was thinking of you. Would you like to see his Holiness in public while you are waiting for a private audience?"

Nani had put on his pleasant expression of smiling civility, beneath which one would barely detect the faint irony of a superior man who knew everything, prepared everything, and could do everything.

"Why, yes, Monsignor," Pierre replied, somewhat astonished by the abruptness of the offer. "Anything of a nature to divert one's mind is welcome when one loses one's time in waiting."

"No, no, you are not losing your time," replied the prelate. "You are looking round you, reflecting, and enlightening yourself. Well, this is the point. You are doubtless aware that the great international pilgrimage of the Peter's Pence Fund will arrive in Rome on Friday, and be received on Saturday by his Holiness. On Sunday, moreover, the Holy Father will celebrate mass at the Basilica. Well, I have a few cards left, and here are some very good places for both ceremonies." So saying he produced an elegant little pocketbook bearing a gilt monogram and handed Pierre two cards, one green and the other pink. "If you only knew how people fight for them," he resumed. "You remember that I told you of two French ladies who are consumed by a desire to see his Holiness. Well, I did not like to support their request for an audience in too pressing a way, and they have had to content themselves with cards like these. The fact is, the Holy Father is somewhat fatigued at the present time. I found him looking yellow and feverish just now. But he has so much courage; he nowadays only lives by force of soul." Then Nani's smile came back with its almost imperceptible touch of derision as he resumed: "Impatient ones ought to find a great example in him, my dear son. I heard that Monsignor Gamba del Zoppo had been unable to help you. But you must not be too much distressed on that account. This long delay is assuredly a grace of Providence in order that you may instruct yourself and come to understand certain things which you French priests do not, unfortunately, realise when you arrive in Rome. And perhaps it will prevent you from making certain mistakes. Come, calm yourself, and remember that the course of events is in the hands of God, who, in His sovereign wisdom, fixes the hour for all things."

Thereupon Nani offered Pierre his plump, supple, shapely hand, a hand soft like a woman's but with the grasp of a vice. And afterwards he climbed into his carriage, which was waiting for him.

It so happened that the letter which Pierre had received from Viscount Philibert de la Choue was a long cry of spite and despair in connection with the great international pilgrimage of the Peter's Pence Fund....