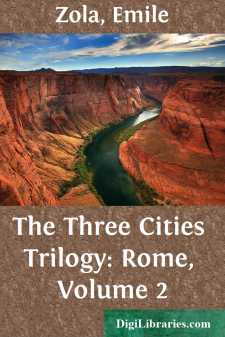 ON the afternoon of that same day Pierre, having leisure before him, at once thought of beginning his peregrinations through Rome by a visit on which he had set his heart. Almost immediately after the publication of "New Rome" he had been deeply moved and interested by a letter addressed to him from the Eternal City by old Count Orlando Prada, the hero of Italian independence and reunion, who, although unacquainted with him, had written spontaneously after a first hasty perusal of his book. And the letter had been a flaming protest, a cry of the patriotic faith still young in the heart of that aged man, who accused him of having forgotten Italy and claimed Rome, the new Rome, for the country which was at last free and united. Correspondence had ensued, and the priest, while clinging to his dream of Neo-Catholicism saving the world, had from afar grown attached to the man who wrote to him with such glowing love of country and freedom. He had eventually informed him of his journey, and promised to call upon him. But the hospitality which he had accepted at the Boccanera mansion now seemed to him somewhat of an impediment; for after Benedetta's kindly, almost affectionate, greeting, he felt that he could not, on the very first day and with out warning her, sally forth to visit the father of the man from whom she had fled and from whom she now asked the Church to part her for ever. Moreover, old Orlando was actually living with his son in a little palazzo which the latter had erected at the farther end of the Via Venti Settembre.

Before venturing on any step Pierre resolved to confide in the Contessina herself; and this seemed the easier as Viscount Philibert de la Choue had told him that the young woman still retained a filial feeling, mingled with admiration, for the old hero. And indeed, at the very first words which he uttered after lunch, Benedetta promptly retorted: "But go, Monsieur l'Abbe, go at once! Old Orlando, you know, is one of our national glories—you must not be surprised to hear me call him by his Christian name. All Italy does so, from pure affection and gratitude. For my part I grew up among people who hated him, who likened him to Satan. It was only later that I learned to know him, and then I loved him, for he is certainly the most just and gentle man in the world."

She had begun to smile, but timid tears were moistening her eyes at the recollection, no doubt, of the year of suffering she had spent in her husband's house, where her only peaceful hours had been those passed with the old man. And in a lower and somewhat tremulous voice she added: "As you are going to see him, tell him from me that I still love him, and, whatever happens, shall never forget his goodness."

So Pierre set out, and whilst he was driving in a cab towards the Via Venti Settembre, he recalled to mind the heroic story of old Orlando's life which had been told him in Paris. It was like an epic poem, full of faith, bravery, and the disinterestedness of another age....