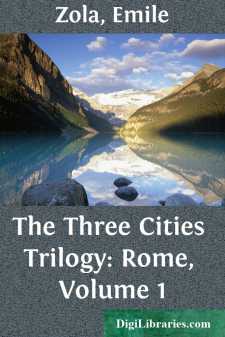 THE train had been greatly delayed during the night between Pisa and Civita Vecchia, and it was close upon nine o'clock in the morning when, after a fatiguing journey of twenty-five hours' duration, Abbe Pierre Froment at last reached Rome. He had brought only a valise with him, and, springing hastily out of the railway carriage amidst the scramble of the arrival, he brushed the eager porters aside, intent on carrying his trifling luggage himself, so anxious was he to reach his destination, to be alone, and look around him. And almost immediately, on the Piazza dei Cinquecento, in front of the railway station, he climbed into one of the small open cabs ranged alongside the footwalk, and placed the valise near him after giving the driver this address:

It was a Monday, the 3rd of September, a beautifully bright and mild morning, with a clear sky overhead. The cabby, a plump little man with sparkling eyes and white teeth, smiled on realising by Pierre's accent that he had to deal with a French priest. Then he whipped up his lean horse, and the vehicle started off at the rapid pace customary to the clean and cheerful cabs of Rome. However, on reaching the Piazza delle Terme, after skirting the greenery of a little public garden, the man turned round, still smiling, and pointing to some ruins with his whip,

"The baths of Diocletian," said he in broken French, like an obliging driver who is anxious to court favour with foreigners in order to secure their custom.

Then, at a fast trot, the vehicle descended the rapid slope of the Via Nazionale, which dips down from the summit of the Viminalis,* where the railway station is situated. And from that moment the driver scarcely ceased turning round and pointing at the monuments with his whip. In this broad new thoroughfare there were only buildings of recent erection. Still, the wave of the cabman's whip became more pronounced and his voice rose to a higher key, with a somewhat ironical inflection, when he gave the name of a huge and still chalky pile on his left, a gigantic erection of stone, overladen with sculptured work-pediments and statues.

* One of the seven hills on which Rome is built. The other six are the Capitoline, Aventine, Quirinal, Esquiline, Coelian, and Palatine. These names will perforce frequently occur in the present narrative.

"The National Bank!" he said.

Pierre, however, during the week which had followed his resolve to make the journey, had spent wellnigh every day in studying Roman topography in maps and books. Thus he could have directed his steps to any given spot without inquiring his way, and he anticipated most of the driver's explanations. At the same time he was disconcerted by the sudden slopes, the perpetually recurring hills, on which certain districts rose, house above house, in terrace fashion. On his right-hand clumps of greenery were now climbing a height, and above them stretched a long bare yellow building of barrack or convent-like aspect....