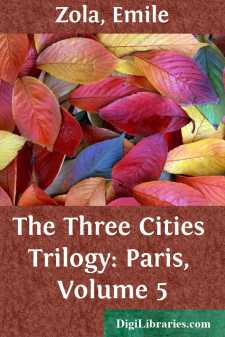 FOR some reason of his own Guillaume was bent upon witnessing the execution of Salvat. Pierre tried to dissuade him from doing so; and finding his efforts vain, became somewhat anxious. He accordingly resolved to spend the night at Montmartre, accompany his brother and watch over him. In former times, when engaged with Abbe Rose in charitable work in the Charonne district, he had learnt that the guillotine could be seen from the house where Mege, the Socialist deputy, resided at the corner of the Rue Merlin. He therefore offered himself as a guide. As the execution was to take place as soon as it should legally be daybreak, that is, about half-past four o'clock, the brothers did not go to bed but sat up in the workroom, feeling somewhat drowsy, and exchanging few words. Then as soon as two o'clock struck, they started off.

The night was beautifully serene and clear. The full moon, shining like a silver lamp in the cloudless, far-stretching heavens, threw a calm, dreamy light over the vague immensity of Paris, which was like some spell-bound city of sleep, so overcome by fatigue that not a murmur arose from it. It was as if beneath the soft radiance which spread over its roofs, its panting labour and its cries of suffering were lulled to repose until the dawn. Yet, in a far, out of the way district, dark work was even now progressing, a knife was being raised on high in order that a man might be killed.

Pierre and Guillaume paused in the Rue St. Eleuthere, and gazed at the vaporous, tremulous city spread out below then. And as they turned they perceived the basilica of the Sacred Heart, still domeless but already looking huge indeed in the moonbeams, whose clear white light accentuated its outlines and brought them into sharp relief against a mass of shadows. Under the pale nocturnal sky, the edifice showed like a colossal monster, symbolical of provocation and sovereign dominion. Never before had Guillaume found it so huge, never had it appeared to him to dominate Paris, even in the latter's hours of slumber, with such stubborn and overwhelming might.

This wounded him so keenly in the state of mind in which he found himself, that he could not help exclaiming: "Ah! they chose a good site for it, and how stupid it was to let them do so! I know of nothing more nonsensical; Paris crowned and dominated by that temple of idolatry! How impudent it is, what a buffet for the cause of reason after so many centuries of science, labour, and battle! And to think of it being reared over Paris, the one city in the world which ought never to have been soiled in this fashion! One can understand it at Lourdes and Rome; but not in Paris, in the very field of intelligence which has been so deeply ploughed, and whence the future is sprouting. It is a declaration of war, an insolent proclamation that they hope to conquer Paris also!"

Guillaume usually evinced all the tolerance of a /savant/, for whom religions are simply social phenomena. He even willingly admitted the grandeur or grace of certain Catholic legends....