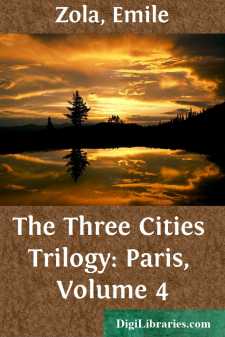 ON the mild March morning when Pierre left his little house at Neuilly to accompany Guillaume to Montmartre, he was oppressed by the thought that on returning home he would once more find himself alone with nothing to prevent him from relapsing into negation and despair. The idea of this had kept him from sleeping, and he still found it difficult to hide his distress and force a smile.

The sky was so clear and the atmosphere so mild that the brothers had resolved to go to Montmartre on foot by way of the outer boulevards. Nine o'clock was striking when they set out. Guillaume for his part was very gay at the thought of the surprise he would give his family. It was as if he were suddenly coming back from a long journey. He had not warned them of his intentions; he had merely written to them now and again to tell them that he was recovering, and they certainly had no idea that his return was so near at hand.

When Guillaume and Pierre had climbed the sunlit slopes of Montmartre, and crossed the quiet countrified Place du Tertre, the former, by means of a latch-key, quietly opened the door of his house, which seemed to be asleep, so profound was the stillness both around and within it. Pierre found it the same as on the occasion of his previous and only visit. First came the narrow passage which ran through the ground-floor, affording a view of all Paris at the further end. Next there was the garden, reduced to a couple of plum-trees and a clump of lilac-bushes, the leaves of which had now sprouted. And this time the priest perceived three bicycles leaning against the trees. Beyond them stood the large work-shop, so gay, and yet so peaceful, with its huge window overlooking a sea of roofs.

Guillaume had reached the work-shop without meeting anybody. With an expression of much amusement he raised a finger to his lips. "Attention, Pierre," he whispered; "you'll just see!"

Then having noiselessly opened the door, they remained for a moment on the threshold.

The three sons alone were there. Near his forge stood Thomas working a boring machine, with which he was making some holes in a small brass plate. Then Francois and Antoine were seated on either side of their large table, the former reading, and the latter finishing a block. The bright sunshine streamed in, playing over all the seeming disorder of the room, where so many callings and so many implements found place. A large bunch of wallflowers bloomed on the women's work-table near the window; and absorbed as the young men were in their respective tasks the only sound was the slight hissing of the boring machine each time that the eldest of them drilled another hole.

However, although Guillaume did not stir, there suddenly came a quiver, an awakening. His sons seemed to guess his presence, for they raised their heads, each at the same moment. From each, too, came the same cry, and a common impulse brought them first to their feet and then to his arms.