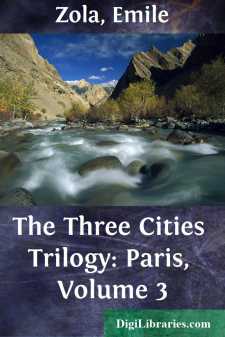 ON the Wednesday preceding the mid-Lent Thursday, a great charity bazaar was held at the Duvillard mansion, for the benefit of the Asylum of the Invalids of Labour. The ground-floor reception rooms, three spacious Louis Seize /salons/, whose windows overlooked the bare and solemn courtyard, were given up to the swarm of purchasers, five thousand admission cards having been distributed among all sections of Parisian society. And the opening of the bombarded mansion in this wise to thousands of visitors was regarded as quite an event, a real manifestation, although some people whispered that the Rue Godot-de-Mauroy and the adjacent streets were guarded by quite an army of police agents.

The idea of the bazaar had come from Duvillard himself, and at his bidding his wife had resigned herself to all this worry for the benefit of the enterprise over which she presided with such distinguished nonchalance. On the previous day the "Globe" newspaper, inspired by its director Fonsegue, who was also the general manager of the asylum, had published a very fine article, announcing the bazaar, and pointing out how noble, and touching, and generous was the initiative of the Baroness, who still gave her time, her money, and even her home to charity, in spite of the abominable crime which had almost reduced that home to ashes. Was not this the magnanimous answer of the spheres above to the hateful passions of the spheres below? And was it not also a peremptory answer to those who accused the capitalists of doing nothing for the wage-earners, the disabled and broken-down sons of toil?

The drawing-room doors were to be opened at two o'clock, and would only close at seven, so that there would be five full hours for the sales. And at noon, when nothing was as yet ready downstairs, when workmen and women were still decorating the stalls, and sorting the goods amidst a final scramble, there was, as usual, a little friendly /dejeuner/, to which a few guests had been invited, in the private rooms on the first floor. However, a scarcely expected incident had given a finishing touch to the general excitement of the house: that very morning Sagnier had resumed his campaign of denunciation in the matter of the African Railway Lines. In a virulent article in the "Voix du Peuple," he had inquired if it were the intention of the authorities to beguile the public much longer with the story of that bomb and that Anarchist whom the police did not arrest. And this time, while undertaking to publish the names of the thirty-two corrupt senators and deputies in a very early issue, he had boldly named Minister Barroux as one who had pocketed a sum of 200,000 francs. Mege would therefore certainly revive his interpellation, which might become dangerous, now that Paris had been thrown into such a distracted state by terror of the Anarchists. At the same time it was said that Vignon and his party had resolved to turn circumstances to account, with the object of overthrowing the ministry. Thus a redoubtable crisis was inevitably at hand....